Foreign Artists and Communities in Modern Paris, 1870-1914
Strangers in Paradise 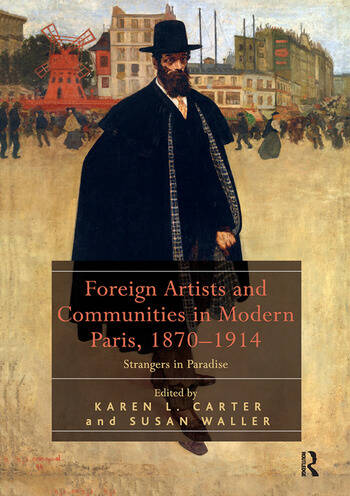 Foreign Artists and Communities in Modern Paris, 1870-1914: Strangers in Paradise

Foreign Artists and Communities in Modern Paris, 1870-1914 examines Paris as a center of international culture that attracted artists from Western and Eastern Europe, Asia and the Americas during a period of burgeoning global immigration. Sixteen essays by a group of emerging and established international scholars - including several whose work has not been previously published in English - address the experiences of foreign exiles, immigrants, students and expatriates. They explore the formal and informal structures that permitted foreign artists to forge connections within and across national communities and in some cases fashion new, transnational identities in the City of Light. Considering Paris from an innovative global perspective, the book situates both important modern artists - such as Edvard Munch, Sonia Delaunay-Terk, Marc Chagall and Gino Severini - and lesser-known American, Czech, Italian, Polish, Welsh, Russian, Japanese, Catalan, and Hungarian painters, sculptors, writers, dancers, and illustrators within the larger trends of international mobility and cultural exchange. Broadly appealing to historians of modern art and history, the essays in this volume characterize Paris as a thriving transnational arts community in which the interactions between diverse cultures, peoples and traditions contributed to the development of a hybrid and multivalent modern art.

'Foreign Artists and Communities in Modern Paris, 1870-1914 constitutes a major contribution to art history and to the broader field of modernist studies. The essays throw new light on major artists, including Gwen John, Medardo Rosso and Gino Severini, as well as understudied subjects, such as the evolving development of Catalan, Czech, Polish, American, and Japanese communities within metropolitan Paris. Additionally, the establishment of transnational Queer spaces, the early emergence of Jewish exile groups in response to Pogroms in Eastern Europe, and the economic role of the graphic arts and craft production among émigré communities are all analyzed with great acuity.'

'This collection of essays by an international group of authors provides fascinating insights into the lives, careers, and creations of foreign artists who visited Paris or made it their permanent home at the turn of the nineteenth century. Foreign Artists and Communities in Modern Paris, 1870-1914 illuminates the expatriate communities these artists formed, the international networks of which they became a part, their interaction (or not) with French Modernism, and the impact they exerted on the art of others-all against the backdrop of the difficulty to adjust and survive in a foreign country. For those interested in international artistic exchanges, this book is a must-read.'

'Editors Karen L. Carter and Susan Waller do a laudable job of synthesizing the varied topics presented in the book. The volume opens with a comprehensive overview of the context and environment in Paris around the turn of the century, and this introduction is, perhaps, one of the most valuable aspects of the book.'

'In conclusion, this volume is a welcome addition to scholarship on foreign artists communities and a refreshing perspective on the art world of nineteenth-century Paris. For the non-specialist reader, the essays can be read easily in the designated order; patterns and common themes will emerge, as outlined in this review. As such, the volume is an excellent introduction to the most up-to-date literature on the foreign artist experience in nineteenth-century Europe. Alternatively, all essays, as discrete units, can be read individually and in any order. As many essays discuss similar and overlapping themes or present artists in multiple roles, e.g. Modigliani as Jewish artist and Modigliani as Italian artist, the index is an extremely valuable tool for using this book.'

'The book ... yields a host of new findings regarding the multicultural form of Paris as art centre prior to 1914. The authors have managed to gather together many examples of the vibrant cultural exchange that took place between artists from Europe, North America and Japan, expand the horizons of problems being investigated by art history, and cast a new light on hitherto entrenched ideas.'