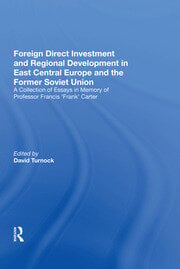 Foreign Direct Investment and Regional Development in East Central Europe and the Former Soviet Union: A Collection of Essays in Memory of Professor Francis 'Frank' Carter

With the achievement of further EU and NATO enlargement, a critical political and economic lens is now focused on East Central Europe and, to a lesser extent, the other former communist states. Economic growth in each transition state - and more broadly the region - pivots around the prospects for foreign direct investment (FDI), with decisions on where foreign investors will locate their projects now vitally important. This book - the first one devoted to a geographical survey concentrating specifically on FDI in the region - brings together a wide range of prominent authors from the US and Europe, including the late Frank Carter, to provide a timely and critical examination of the importance of foreign investment. It presents a detailed analysis of location patterns and their significance for regional development, with particular emphasis given to the important socioeconomic and political consequences of uneven distribution of FDI across the region and its constituent countries. Divided into two parts, the book first deals with general overarching themes and issues before applying these to more specific country case studies. The second part deals with regional studies, focusing broadly on the Western Balkans and Bulgaria, before looking at specific economic sectors in individual countries.