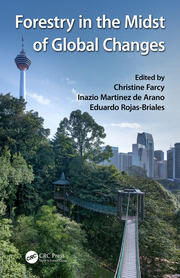 Forestry today, like many other sectors that traditionally rely on material goods, faces significant global drivers of societal change that are less often addressed than the environmental concerns commonly in the spotlight of scientific, political, and news media. There are three major interconnected issues that are challenging forestry at its foundation: urbanization, tertiarization, and globalization. These issues are at the core of this book.

The urbanization of society, a process in development from the first steps of industrialization, is particularly significant today with the predominance and quick growth rate of the world’s urban population. Ongoing urbanization is creating new perspectives on forestry, inducing changes in its social representation, and changing lifestyles and practices with a tendency toward dematerialization. The process of urbanization is also creating a disconnect and in some ways is leaving behind rurality, the sector of society where forestry has traditionally developed and taken place over centuries.

The second issue covered in this book is the tertiarization of the economy. In society today, the sector of services largely dominates the economy and occupies the major part of the world’s active population. This ongoing process modifies professional modalities and ways of life and opens new doors to forests through the immaterial goods they provide. It also profoundly changes the framework, rules, processes, means of production, exchanges between economic factors, and the processes of innovation.

The third issue is undoubtedly globalization in its economic, political, and social components. Whether it’s through bridging distances, crossing borders, accelerating changes, standardizing practices, leveling hierarchical structures, or pushing for interdependence, globalization impacts everyone, everywhere in multiple ways. Forestry is no exception.

focuses on these global drivers of change from the perspective of their relationships with how society functions. By analyzing them in depth through multidisciplinary, interdisciplinary, and even transdisciplinary approaches, this book is helping to design the forestry of tomorrow.

Section I. SETTING THE SCENE . Introduction. What is a forest? Main Milestones in Forestry Evolution.Main Current Ethical Models on the Scene. Section II. URBANIZATION OF THE SOCIETY. Main Findings and Trends of Urbanization. Urban Lifestyles: Forest Needs and Fears. Toward a Social Representation of Forest by Western Urbanized Societies. Human Desertification and Disempowerment of Rural Territories.Dendroculture: Social Imaginations, Art and Culture in Forests.Communicating to Support the Comprehension of Forest-Related Issues by Non-Expert Audiences. Section III. TERTIARIZATION OF THE ECONOMY. Main findings and Trends of Tertiarization. Increasing Role of Services: Trends, Drivers and Search for New Perspectives. Human Health, a Tertiary Product of Forests. Framing Investments in Forest Services. Motivation of Service Producers. Main Findings and Trends of Globalization. Financialization and the Forestry Sector. Social and Technological Innovations in Forestry.Globalization and Employment in Forests and Tree Product Value Chains: Are Women Losing Out? Fragmented Forest Policy: Asset or Concern? Section V. LESSONS LEARNED. Conclusion and Perspectives.

Holder of a MSc. agricultural Engineer - forest and water at UCL (1994) and a PhD in agricultural sciences and biological engineering at UCL (2005). Currently senior researcher, invited lecturer and international forest policy advisor. Expertise in forestry, national & international forest policy, forest planning, remote sensing, information systems, bridge between social and natural sciences, and science and policy cross-fertilization. Currently chair of the European Forestry Commission of FAO, vice-chair of FAO Committee on Forestry, vice-chair of the board of the European Forest Institute (EFI), vice-chair of the scientific committee of ONF (France), member of the scientific committee of AgroParisTech (France), member of the scientific council of ECOFOR (France). Chair or member of international evaluation panels and reviewer of scientific disciplinary and inter-disciplinary journals.

Inazio Martínez de Arano is Head of Office at EFIMED since June 2013. He holds a degree in Ecology (Basque Country University), a post-degree in Landscape management (Polytechnic University of Valencia) and a M.Sc. in Forestry (Universidad Austral de Chile). He has worked in forest research (sustainable forest operations) and has served as President of the Union of forest owners of southern Europe, following policy and market developments in Europe and active at multilateral policy forums (Forest Europe, UNECE COFFI, Silva-Mediterranea, EU’s civil dialogue). His current focus is in understanding the challenges and opportunities for innovating in the Mediterranean bioeconomy.