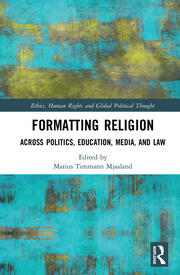 To talk about religion is to talk about politics, identity, terrorism, migration, gender, and a host of other aspects of society. This volume examines and engages with larger debates around religion and proposes a new approach that moves beyond the usual binaries to analyse its role in our societies at large.

delves into these complexities and demonstrates the topical need for better understanding of how religion, society, culture, and law interact and are mutually influenced in periods of transition. It examines how over the last two decades, people and institutions have been grappling with the role of religion in socio-cultural and political conflicts worldwide. Drawing on a host of disciplines – including sociology, philosophy, anthropology, politics, media, law, and theology – the essays in this book analyse how religion is formatted today, and how religion continuously formats society, from above and from below.


The volume will be of great interest to scholars and researchers of religious studies, politics, media and culture studies, and sociology.

1. Formatting Religion: Introducing the Approach 2. Sacralization and Desacralization: Political Domination and Religious Interpretation 3. A New Formatting: Myanmar´s 2015 ‘Race and Religion Laws’ 4. Monitoring Religious Freedom: Persecution, documentation and the role of political fact 5. ‘Shared Religiousness’ as a Source of Values? 6. A Time of Change in the Estonian Islamic Community: The Question of Power among the Surrendered Ones 7. Media Formatting Religion and Conflict 8. Do the Toledo Guiding Principles Politicise Religious Education? 9. Salient or Silenced: How Religion and Terrorism are Formatted in School 10. Religion, Human Rights and Juridification 11. Towards Re-Sacralization of Nordic Law?

Marius Timmann Mjaaland is Professor of Philosophy of Religion at the Faculty of Theology, University of Oslo, Norway. He is president of the Nordic Society for Philosophy of Religion and served as Academic Director of Oslo University’s inter-facultary research program PluRel (Religion in Pluralist Societies) 2013–17. He is also the author and editor of several books, including Autopsia (2008) and The Hidden God: Luther, Philosophy and Political Theology (2016).