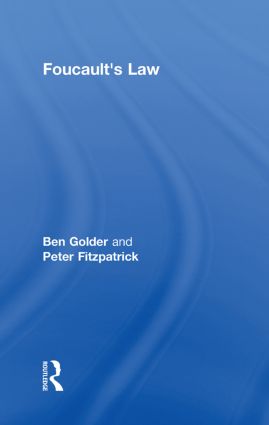 Foucault’s Law is the first book in almost fifteen years to address the question of Foucault’s position on law. Many readings of Foucault’s conception of law start from the proposition that he failed to consider the role of law in modernity, or indeed that he deliberately marginalized it. In canvassing a wealth of primary and secondary sources, Ben Golder and Peter Fitzpatrick rebut this argument. They argue that rather than marginalize law, Foucault develops a much more radical, nuanced and coherent theory of law than his critics have acknowledged. For Golder and Fitzpatrick, Foucault’s law is not the contained creature of conventional accounts, but is uncontainable and illimitable. In their radical re-reading of Foucault, they show how Foucault outlines a concept of law which is not tied to any given form or subordinated to a particular source of power, but is critically oriented towards alterity, new possibilities and different ways of being.

Foucault’s Law is an important and original contribution to the ongoing debate on Foucault and law, engaging not only with Foucault’s diverse writings on law and legal theory, but also with the extensive interpretive literature on the topic. It will thus be of interest to students and scholars working in the fields of law and social theory, legal theory and law and philosophy, as well as to students of Foucault’s work generally.

"Golder and Fitzpatrick’s brief volume Foucault’s Law, appearing 25 years after the death of the French thinker, proposes an original, philosophical rereading of Foucault on law…In contrast with those theorists who represent an extreme in ‘using’ Foucault’s legacy, Golder and Fitzpatrick offer an interpretation that concentrates only on extending Foucault’s own ideas. This book deserves a favorable reception for its strong points, for its brevity and [its] audacity" - Rafael Ramis Barcelo, Res Publica, December 2009

"All in all, Golder's and Fitzpatrick's book about Foucault and the law is a veritable joy to read. It sketches the contours of a legal theory that differs radically from mainstream views by dint of combining historical, social-scientific and normative analyses of the law. For this reason it is not only a treasure trove (Fundgrube) for future research, but also suitable to be used for teaching purposes, if accompanied by the original texts to which it refers." - Marc de Wilde, Rechtsfilosofie & Rechtstheorie, Issue 2009.3

"Golder and Fitzpatrick’s Foucault’s Law is a brief, yet rich, contribution to the burgeoning literature on the place of law in Foucault’s thought. In three densely elaborated chapters they defend the view that, far from being the antinomian thinker he is often taken to be, Foucault provides the resources for the development of a positive conception of law…In addition, the authors bring to their task an impressive command of the primary and secondary literature. Those looking for an entry point into the issue of Foucault and law would do well to begin here." - Max Rosenkrantz, Foucault Studies, No. 8, February 2010

"The authors provide excellent organization, fluidity of argument, and clarity of expression. Given the abstract, theoretical subject matter of the book and the complex post-structuralist paradigm within which it is situated, the authors expertly guide the reader through their arguments and explanations without oversimplifying or undermining the complexity of the subject matter that they tackle." - Ashan Mirza, Osgoode Hall Law Journal, 2009

"This dense book, compact as it may be, extending over barely 150 pages, was urgently needed to reinvigorate a stagnated debate… [In] this sense the book certainly succeeds and will no doubt provoke many counter-arguments from Foucauldians and non-Foucauldians alike." - Panu Minkkinen, University of Leicester, Social & Legal Studies, 20(1) 117-136, 2011

Ben Golder is a lecturer in law at the University of New South Wales, Australia.

Peter Fitzpatrick is Anniversary Professor of Law at Birkbeck, University of London.