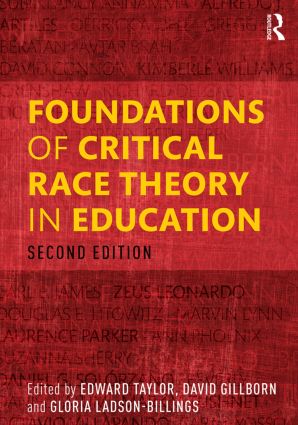 The emergence of Critical Race Theory (CRT) marked a pivotal moment in the history of racial politics within the academy and powerfully influenced the broader conversation about race and racism in the United States and beyond. Comprised of articles by some of most prominent scholars in the field of CRT, this groundbreaking anthology is the first to pull together both the foundational writings and more recent scholarship on the cultural and racial politics of schooling. The collection offers a variety of critical perspectives on race, analyzing the causes, consequences and manifestations of race, racism, and inequity in schooling. Unique to this updated edition are a variety of contributions by key CRT scholars published within the last five years, including an all-new section dedicated to the intersections of race and dis/ability within contemporary schooling. Each section concludes with a set of questions and discussion points to further engage with the issues discussed in the readings. This revised edition of a landmark publication documents the progress to date of the CRT movement and acts to further spur developments in education policy, critical pedagogy, and social justice, making it a crucial resource for students and educators alike.

"This collection details well all of the ways that an intellectual movement has moved beyond its adolescence while still remaining true to its core principles and values. In covering ground from Affirmative Action to DisCrit to the intersections between white supremacy and white allies, the second edition of this reader demonstrates how CRT’s most substantive insights and exciting research are taking place in education policy and law."

"Foundations of Critical Race Theory in Education is a comprehensive text that smartly includes both the germinal legal literature in CRT and education. The selection of articles covers a range of topics and themes that shows not only the breadth of scholarly productivity, but also the depth of the literature as it relates to racialized educational inequity. This second edition includes newer literature that takes up newer areas of foci for CRT scholars in education, namely, Disability Studies and Intersectionality. This important book will be a staple for many courses and a valuable resource for any scholar who takes the study of race and CRT seriously."

The Foundations of Critical Race Theory in Education: An Introduction

1. Just What is Critical Race Theory and What’s it Doing in a Nice Field Like Education?

Questions and Discussion Points for Part One

Part Two: Racism and the Everyday World of Education

4. Why is the School Basketball Team Predominantly Black?

5. An Apartheid of Knowledge in Academia: The Struggle over the ‘Legitimate’ Knowledge of Faculty of Color

7. Affirmative Action as a Majoritarian Device: Or, Do You Really Want to be a Role Model?

8. Critical Race Theory and Interest Convergence in the Backlash against Affirmative Action: Washington State and Initiative 200

10. What’s Race Got to Do with It? Critical Race Theory’s Conflicts With and Connections to Qualitative Research Methodology and Epistemology

11. Toward an Interdisciplinary Understanding of Educational Equity and Difference: The Case of the Racialization of Ability

12. The Song Remains the Same: Transposition and the Disproportionate Representation of Minority Students in Special Education

13. Dis/ability Critical Race Studies (DisCrit): Theorizing at the Intersections of Race and Dis/ability

14. Mapping the Margins: Intersectionality, Identity Politics, and Violence against Women of Color

15. Ain’t I a Woman? Revisiting Intersectionality

16. The Color of Supremacy: Beyond the Discourse of ‘White Privilege’

17. Teaching White Students about Racism: The Search for Whites Allies and the Restoration of Hope

19. Telling Stories Out of School: An Essay on Legal Narratives

Daniel A. Farber and Suzanna Sherry

20. On Telling Stories in School: A Reply to Farber and Sherry

Edward Taylor is Vice Provost and Dean of Undergraduate Academic Affairs and Professor of Educational Leadership and Policy Studies at the University of Washington, Seattle.

David Gillborn is Professor of Critical Race Studies at the University of Birmingham and Editor-in-Chief of the international journal Race, Ethnicity and Education.

Gloria Ladson-Billings is the Kellner Family Chair in Urban Education and Professor of Curriculum and Instruction at the University of Wisconsin-Madison.