Foundations of Dispute Resolution
Volume I 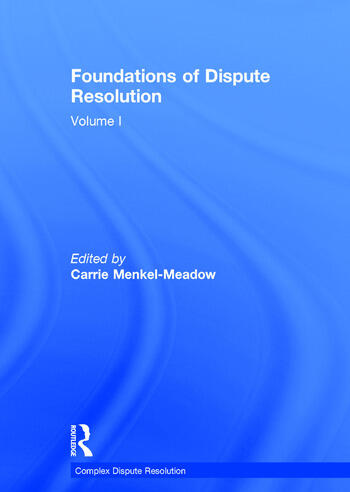 Foundations of Dispute Resolution: Volume I

This volume brings together leading research articles in to the theory, research findings and applications of modern dispute resolution. The articles relate to a wide variety of settings and cover the primary processes of negotiation, mediation and arbitration, as well as exploring combinations and hybridization of those processes. Also included are articles on the search for 'value-added' or 'pie-expanding' creative solutions; the choosing of strategies, based on game theory, economics and social and cognitive psychology; how foundational theories have been altered or modified, depending on contexts, and numbers of parties and issues; and what issues are raised by the 'privatization of justice'. The articles span both the 'science' and 'art' of dispute resolution, consider the relationship of peace to justice and include both empirical (descriptive) and normative (prescriptive) assessments of how these processes of dispute resolution function.

Contents: Introduction; Part I Foundations of Negotiation Theory and Practice: Toward another view of legal negotiation: the structure of problem solving, Carrie Menkel-Meadow; Chronicling the complexification of negotiation theory and practice, Carrie Menkel-Meadow; Why negotiations fail: an exploration of barriers to the resolution of conflict, Robert H. Mnookin; Shattering negotiation myths: empirical evidence on the effectiveness of negotiation style, Andrea Kupfer Schneider; When not to negotiate: a negotiation imperialist reflects on appropriate limits, Robert H. Mnookin; Machiavelli and the Bar: ethical limitations on lying in negotiation, James J. White; Negotiating with lawyers, men and things: the contextual approach still matters, Carrie Menkel-Meadow; Let's not make a deal: an empirical study of decision making in unsuccessful settlement negotiations, Randall L. Kiser, Martin A. Asher and Blakeley B. McShane. Part II Foundations of Mediation Theory and Practice: Mediation - its form and functions, Lon L. Fuller; Post-settlement settlements, Howard Raiffa; The many ways of mediation: the transformation of traditions, ideologies, paradigms, and practices, Carrie Menkel-Meadow; Mediation as parallel seminars: lessons from the student takeover of Columbia University's Hamilton Hall, Carol B. Liebman; Lawyers' representation of clients in mediation: using economics and psychology to structure advocacy in nonadversarial settings, Jean R. Sternlight; Mediator orientations, strategies and techniques, Leonard L. Riskin; Family mediation: the development of the regulatory framework in the United Kingdom, Marian Roberts; Nature preserve: the loop of understanding, Gary Friedman and Jack Himmelstein; Lawyer negotiations: theories and realities - what we learn from mediation, Carrie Menkel-Meadow; Environmental mediation and the accountability problem, Lawrence Susskind. Part III Foundations and Issues in Arbitration and Hybrid Processes: Is the US out on a limb? Comparing the US approach to mandatory consumer and employment arbitration to that of the rest of the world, Jean R. Sternlight; Pursuing settlement in an adversary culture: a tale of innovation co-opted or 'the law of ADR', Carrie Menkel-Meadow; Part IV Coda: Coda; Name index.