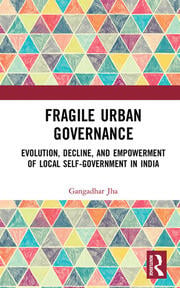 Urbanization is giving rise to a vibrant and volatile urban India. The urban local self-government (ULSG) is struggling to provide efficient, effective, inclusive and responsive urban services. Most ULSGs are too fragile to perform the mandated functions for enhancing the quality of life and making cities and towns livable.

The book traces evolution of ULSGs, its decline after Independence, and steps taken to strengthen them, especially through the big-bang decentralization initiative of 1992 for their empowerment, by enacting the 74th Constitution Amendment Act (74th CAA). Analyzing facets of the decentralization initiative, views of two review Commissions, policy responses to it and processes for implementation of constitutional provisions, it alludes to conspicuous gaps at three levels such as (i) gaps and deficiencies in the 74th CAA (ii) gaps in the post-74th CAA municipal Acts that were required to conform to the constitutional provisions, and (iii) gaps due to half-hearted implementation of even the mandatory constitutional provisions.

Empowerment and strengthening of ULSG being in the nature of an imperative, it explores plausible options within the constitutional autonomy of states. Empowerment denotes authority, power and clarity in municipal functional and fiscal domain. Therefore it also specifies experiential based rational framework and a strategy for strengthening ULSGs that must look beyond the existing predilection for mere training. It fills an existing void in ULSG literature on the subject.

Gangadhar Jha has been a member of the faculty of the Centre for Urban Studies of the Indian Institute of Public Administration, Professor at the National Institute of Urban Affairs (NIUA) and Principal Consultant and Director at IPE Global. He has been Economic Advisor to the first Delhi Finance Commission, Government of the National Territory of Delhi. He has also worked as Coordinator of the Indo-USAID collaborative FIRE-D Project at NIUA from 1996 to 2002.

Dr. Jha has written extensively on urban governance, municipal finance, institutional strengthening, capacity development and training. He has worked on these issues in Sri Lanka, Iraq, Bhutan, Indonesia, and Nepal besides India, on projects supported by multilateral and bilateral funding agencies.