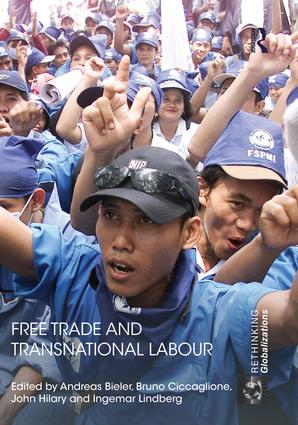 ‘Free trade’ strategies have increasingly become a problem for the international labour movement. While trade unions in the North especially in manufacturing have supported free trade agreements to secure export markets for their companies, trade unions in the Global South oppose these agreements, since they often imply deindustrialisation. Especially the expansion of the free trade agenda into services, public procurement, investment, intellectual property rights as well as investor to state dispute settlement provisions are considered to be problematic.

The purpose of this volume is to understand better these dynamics underlying ‘free trade’ policy-making in order to explore possibilities for transnational labour solidarity. Bringing together labour academics with trade union researchers and social movement activists, this volume moves from conceptual reflections about the impact of ‘free trade’ via the analysis of struggles around free trade agreements to considerations of concrete alternatives.

This book was published as a special issue of Globalizations.

1. Introduction I. Conceptual reflections 2. The implosion of global capitalism and the challenge for the radical left 3. ‘Imperialist rent’ in practice and theory 4. Uneven and combined development and unequal exchange: the second wind of neoliberal ‘free trade’ II. Empirical investigations 5. European trade unions and free trade: between international solidarity and perceived self-interest 6. Canadian, Québécois and European unions and the Comprehensive Economic and Trade Agreement negotiations 7. The ASEAN-China FTA and its implications for the global economy 8. COSATU and South Africa’s free trade policy 9. The Free Trade Area of the Americas in the Long Crisis of Brazilian Labour: lessons for building North-South responses to the current crisis 10. Free trade and the new labour internationalism 11. Mapping the resistance against bilateral free trade and investment agreements III. Outlook 12. Unions and Trade: what kind of solidarity? 13. Global Crises: the need to go beyond transnational solidarity in the struggle against the expansion of free trade agreements 14. Conclusions

Andreas Bieler is Professor of Political Economy and Fellow of the Centre for the Study of Social and Global Justice in the School of Politics and International Relations at the University of Nottingham, UK.

is the European Co-ordinator of the Seattle to Brussels Network.

is the Executive Director of the British NGO War on Want.

is a former researcher and social policy adviser to the Confederation of Swedish Trade Unions (LO).