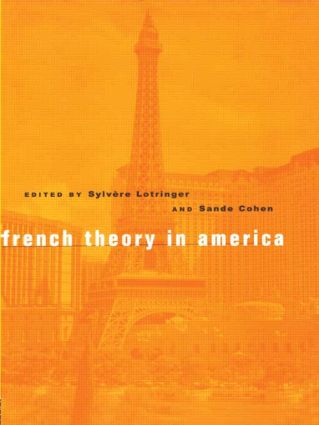 What does it mean to"do theory" in America? In what ways has "French Theory" changed American intellectual and artistic life? How different is it from what French intellectuals themselves conceived, and what does all this tell us about American intellectual life? Is "French Theory" still a significant force in America, raising conceptual questions not easily answered? In this volume of new work--including the French writers Julia Kristeva, Jacques Derrida, Jean Baudrillard, and Gilled Delezue, as well as essays by Sylvere Lotringer and Sande Cohen, Mario Biagoli, Elie During, Chris Kraus, Alison Gingeras, and Kriss Ravetto, among others--French theorists assess the impact and reception of their work in America, and American-based critics account for their effects in different areas of cultural criticism and art over the last thirty years.

"Still a troubleshooting force in areas of thinking and artistic endeavor, French Theory is an object of fascination and phobic anxiety. Sylvere Lotringer--to whom we owe a debt of thanks for organizing the most subversive incursion of theory in America--together with Sande Cohen, has put together an outstanding collection of essays that interrogates the boundaries and territorialities of contemporary thought. Stripped of its French passport and equipped with fake American IDs, "French Theory" belongs, finally, to no recognizable national entity and cannot be reduced to an identity politics. Even as it morphs into familiar locutions and forms, it remains resolutely difficult, dense, exhilarating and defiant, at once responsible to the past and bravely forward-looking." -- Avital Ronell, New York University

Sylvere Lotringer is Professor of French and Comparative Literature at Columbia University and editor and publisher of Semiotext(e). Sande Cohen is Professor in the School of Critical Studies at California Institute of the Arts.