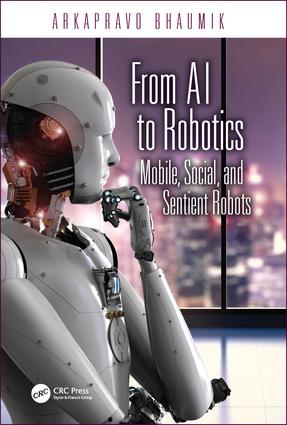 From AI to Robotics

From AI to Robotics: Mobile, Social, and Sentient Robots is a journey into the world of agent-based robotics and it covers a number of interesting topics, both in the theory and practice of the discipline. The book traces the earliest ideas for autonomous machines to the mythical lore of ancient Greece and ends the last chapter with a debate on a prophecy set in the apparent future, where human beings and robots/technology may merge to create superior beings – the era of transhumanism. Throughout the text, the work of leading researchers is presented in depth, which helps to paint the socio-economic picture of how robots are transforming our world and will continue to do so. This work is presented along with the influences and ideas from futurists, such as Asimov, Moravec, Lem, Vinge, and of course Kurzweil.

The book furthers the discussion with concepts of Artificial Intelligence and how it manifests in robotic agents. Discussions across various topics are presented in the book, including control paradigm, navigation, software, multi-robot systems, swarm robotics, robots in social roles, and artificial consciousness in robots. These discussions help to provide an overall picture of current day agent- based robotics and its prospects for the future. Examples of software and implementation in hardware are covered in Chapter 5 to encourage the imagination and creativity of budding robot enthusiasts.

The book addresses several broad themes, such as AI in theory versus applied AI for robots, concepts of anthropomorphism, embodiment and situatedness, extending theory of psychology and animal behavior to robots, and the proposal that in the future, AI may be the new definition of science. Behavior-based robotics is covered in Chapter 2 and retells the debate between deliberative and reactive approaches. The text reiterates that the effort of modern day robotics is to replicate human-like intelligence and behavior, and the tools that a roboticist has at his or her disposal are open source software, which is often powered by crowd-sourcing. Open source meta-projects, such as Robot Operating System (ROS), etc. are briefly discussed in Chapter 5.

The ideas and themes presented in the book are supplemented with cartoons, images, schematics and a number of special sections to make the material engaging for the reader. Designed for robot enthusiasts – researchers, students, or the hobbyist, this comprehensive book will entertain and inspire anyone interested in the exciting world of robots.

. . . And Then There Were Mobile Robots

Early Pioneers and The Story Till Shakey

Embodied AI, Or the Tale of Taming The Fungus Eater

From AI To Robots

Three Forks in The Road

A Critique of The Nouvelle AI

SECTION II IMPLEMENTATION, OR HOW TO MAKE ROBOTS

TOOLS FOR A ROBOTICIST

The Architecture of Ros

Modularity, The Crown Jewel of Ros

Ros, The Prospects in The Offing

Japan, Robot History in The Making

Robots with Moral Agency, In the Footsteps of Asimov

The Need for The Good Robot

Asimov’s 3 Laws and Their Limitations

Social Changes & The Near Future

Quest for The Sentient Robot

Can Robots Be Conscious?

Self-Awareness, Consciousness and Free Will

From Machines To (Near) Human Beings

Memories, Meditation and The Inner World

Super intelligent robots and other predictions

Peering into the Crystal Ball

Twilight or Rebirth of Our Civilisation?

Arkapravo Bhaumik is from New Delhi, India and has an advanced degree in Mechatronics from King's College, London. His research interests are mobile robotics, robot swarms and human-robot interaction. He is also enthusiastic about the open source philosophy and Linux. He prefers to spend time designing or writing about AI and robotics. His recent robots and simulations have employed ROS, and his research on machine learning has been with SVM to detect emotions from human faces. His excursions into natural language processing has been with Python NLTK. He is currently posted at the Birla Institute of Technology, Ranchi, India.