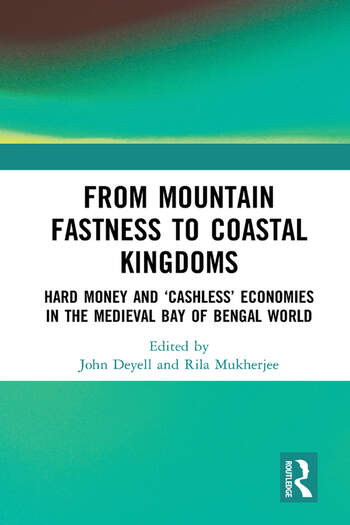 From Mountain Fastness to Coastal Kingdoms: Hard Money and ‘Cashless’ Economies in the Medieval Bay of Bengal World

Money is central to the functioning of economies, yet for the pre modern period, our knowledge of monetary systems is still evolving. Until recently, historians of the medieval world have conflated the use of coins with a high degree of monetization. States without coinage were considered under-monetized. It is becoming more evident, however, that some medieval states used money in complex ways without using coinage. Moneys of account supplanted coins wholly or in part. But there is an imbalance of evidence: coins survive physically, while intangible forms of money leave little trace. This has skewed our understanding.

Since coin usage has been well studied in the past, these essays flesh out our consideration of societies that used money but struck no coins. Absence or shortage of coining metals was not the causative factor: some of these societies had access to metal supplies but still remained coinless. Was this a strategic choice? Does it reflect the unique system of governance that developed in each kingdom?

It is surely time to unravel this puzzle. This book examines money use in the Bay of Bengal world, using the case of medieval Bengal as a fulcrum. Situated between mountains and the sea, this region had simultaneous access to both overland and maritime trade routes.

How did such ‘cashless’ economies function internally, within their regions and in the broader Indian Ocean context? This volume brings together the thoughts of a range of upcoming scholars (and a sprinkling of their elders), on these and related issues.

1. From Mountain Fastness to Coastal Kingdoms: The Contours of the Medieval Bay of Bengal World 2. Media of Exchange under the Pālas and the Senas as Reflected in their Inscriptions 3. Understanding the Economic Networks and Linkages of an Expanded Harikela 4. Money and Communications in Sultanate Bengal and its Neighbouring Areas: Evidence of the Coin-hoards (1205-1576 ce) 5. Cashless Economy or Value for Money: Early Medieval South India 6. Tibet and Bengal : Trade Routes and Long Distance Exchanges with Reference to Silver 7. The Laws of King Mengrai, Cowrie Shells, and Intra-Asian Interactions 8. Hard Money and ‘Cashless’ Economies: Medieval Bengal and the Greater Asian World

is an independent researcher originally from the University of Wisconsin, Madison. A former visiting Professor at the Centre for Historical Studies, Jawaharlal Nehru University, New Delhi, he writes on the pre-modern monetary systems of the Indian Ocean world.

Rila Mukherjee is Professor in the Department of History, School of Social Science, University of Hyderabad. A former Director of the Institut de Chandernagor, she is currently Chief Editor of the Asian Review of World Histories, and Series Editor of Cambridge’s Pasts and Futures.