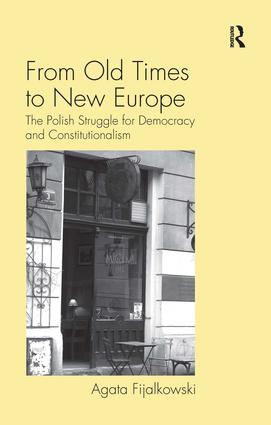 From Old Times to New Europe

The Polish Struggle for Democracy and Constitutionalism, 1st Edition

From Old Times to New Europe considers the post-totalitarian legal framework in today's Europe, arguing that the study of totalitarianism and post-totalitarianism continues to be significant as ever. Drawing mainly on the Polish experience, this analysis focuses on the significant part played by history in the development of the region's identity and preferences concerning the role of the state in public and private life. It examines the political, socio-economic and legal aspects of key events and draws comparisons with other CEE states, whilst implementing key socio-legal theories to explain trends and strains in this post-Communist and post-totalitarian period. With the benefit of access to archival sources in Poland and Russia, this book will be of interest to students and researchers of European law, law and society and international criminal justice.

'This is a well-researched and informative study of the Polish political and legal, but also intellectual, history of the 20th century. Using the impressive body of legal documents and archival materials, Fijalkowski tells the story of political, legal, theoretical and conceptual ruptures and discontinuities typical of Poland and other countries of Central and Eastern Europe.' JirÃ­ PribÃ¡n, Cardiff University, UK 'This clearly written book will be of broad appeal to historians and political scientists as well as to lawyers. It makes a significant contribution to the literature on constitutionalism in Poland and in Central and Eastern Europe more generally. The historical analysis of Poland's constitutional development, during the ideological and military upheavals of the 20th century, is fascinating.' Istvan Pogany, University of Warwick, UK 'In this work the author analyses the transition of Poland from a totalitarian communist, to a fully democratic state, and the factors that influenced the manner in which this was achieved… Fijalkowski’s examination of these complex issues is masterly, and is the product of wide-ranging research in both Polish and Russian archives. Parallels are drawn to the similar experiences of other central and eastern European states such as Romania, Hungary and Czechoslovakia. For anyone interested in the manner in which the most dramatic upheaval in Europe over the last 50 years impacted on the law, lawyers and legal theory, this book is essential reading.' Dignitas

Dr Agata Fijalkowski is Lecturer in Law in the Law School, Lancaster University. Her research interests are in the areas of Criminal justice, criminal law, constitutional law, international comparative criminal justice, comparative law, and civil liberties. One of her main interests concerns legal transformation and the growth of legal culture in Central and Eastern Europe (and how this fits into the broader European context), as well as developments in other post-totalitarian/authoritarian states in the criminal justice and civil liberties/human rights area.