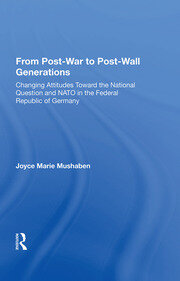 From Post-war To Post-wall Generations: Changing Attitudes Towards The National Question And Nato In The Federal Republic Of Germany

This book is a study of four separate-but-related German Questions, as perceived, interpreted and answered by members of the postwar generations who constitute a majority of the citizens in the 'old states' of the now united Bundesre publik.

0. Introduction: The Evolution of National-Security Consciousness in the Postwar German Federal Republic 1. The Problem of Generations: Identity-Formation and the New "Unencumberedness" 2. What Does it Mean to Be German? from Beethoven to Bitburg, From Demagogues to Democrats 3. Perceptions of the Other Germany: "Renunification Maybe, But I'd Hate to Take My Vacation There" 4. Partnership and its Discontents: Assessing the Federal Republic's Role in NATO 5. Successor Generations and Security Doctrine: "Deterrence, Yes, But Not in My Backyard" 6. Generational Differences and the Gender Gap: Identity and Security Consciousness Among West German Women 7. What it Means to Be Non-German: After Unity, the Deluge 8. Conclusion: From Two States in One Nation to One Volk in Two Cultures