From Religious Empires to Secular States
State Secularization in Turkey, Iran, and Russia 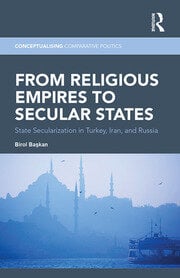 From Religious Empires to Secular States: State Secularization in Turkey, Iran, and Russia

In the 1920s and the 1930s, Turkey, Iran and Russia vehemently pursued state-secularizing reforms, but adopted different strategies in doing so. But why do states follow different secularizing strategies? The literature has already shattered the illusion that secularization of the state has been a unilinear, homogeneous and universal process, and has convincingly shown that secularization of the state has unfolded along different paths. Much, however, remains to be uncovered.

This book provides an in-depth comparative historical analysis of state secularization in three major Eurasian countries: Turkey, Iran and Russia. To capture the aforementioned variation in state secularization across three countries that have been hitherto analyzed as separate studies, Birol Başkan adopts three modes of state secularization: accommodationism, separationism and eradicationism. Focusing thematically on the changing relations between the state and religious institutions, Başkan brings together a host of factors, historical, strategic and structural, to account for why Turkey adopted accommodationism, Iran separationism and Russia eradicationism. In doing so, he expertly demonstrates that each secularization strategy was a rational response to the strategic context the reformers found themselves in.

Birol Başkan is an assistant professor of government at Georgetown University School of Foreign Service in Qatar. He holds a PhD in political science from Northwestern University. His research looks at state-regime-religion relations in the Middle East.

"Birol Baskan makes a major and innovative contribution to the study of secularization. His comparison of one Christian (the USSR) and two Muslim (Turkey and Iran) countries is buttressed by deep and insightful historical research to provide empirical and analytic leverage for his penetrating insights on the paths to, and ultimate limitations of, state-directed secularization. This book will become essential reading for scholars of the three countries and for sociologists who study politics and religion." — Richard W. Lachmann, University at Albany

"Theoretically refined and empirically rich, this book examines the intersection of religion, politics, Islam, and secularism from an innovative standpoint. The author separates the concepts of state, liberalism, and secularism and then creatively re-assembles them. For secularism, the key in this re-assemble is the state-building process: secularism is not so much driven by ideological commitment but material needs for survival in an uncertain domestic and international environment. Offering empirically rich histories, the author builds a clear typology of paths for state secularization—accommodationist (Turkey), separationist (Iran), and eradicationist (Russia) to explain differences in the state secularization. This book will be an essential reading for political scientists, historians, areas studies specialists, and comparative sociologist who are interested in religion and politics." — Turan Kayaoğlu, University of Washington, Tacoma

"Birol Baskan’s From Religious Empires to Secular States, accomplishes the aim of contributing substantially to the social sciences. He provides a thorough and critical review of the current literature on secularization. The book is well-argued and presents challenges relating to the development of the discipline categorical grid. Finally, it offers the original set of theoretical categories, which are highly applicable to intersubjective empirical studies on relationship between states and religion... it is strongly recommendable to scholars interested in state secularization processes." — Joanna Rak, Nicolaus Copernicus University, Torun