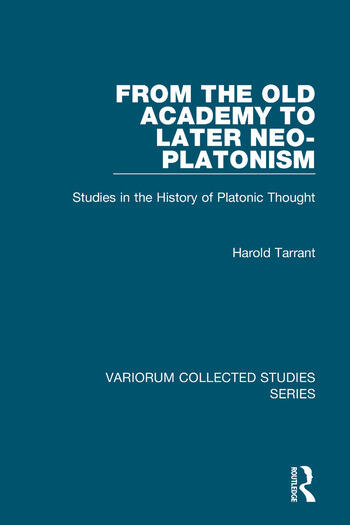 From the Old Academy to Later Neo-Platonism: Studies in the History of Platonic Thought

This volume collects a set of papers on ancient Platonism that span the nine centuries between Plato himself and his commentator Olympiodorus in the 6th century, many of them less easy to obtain. Much of the work is at the intersection of philosophy and literature, and a recurrent aim is to challenge existing orthodoxies and to suggest alternatives. Two further related aims are to encourage the rereading of Plato in the light of the later tradition, and the tradition in the light of influential passages of Plato. The articles are grouped here in three sections, dealing first with Socrates, Plato and the Old Academy, then with the Platonic revival and the 2nd century AD, and finally with later Neoplatonism.

Contents: Preface; Part I Socrates, Plato, and the Old Academy: Midwifery and the Clouds; The Hippias Major and Socratic theories of pleasure; The composition of Plato's Gorgias; Plato's Euthydemus and the two faces of Socrates; Chronology and narrative apparatus in Plato's dialogues; Orality and Plato's narrative dialogues; Plato, prejudice, and the mature-age student in antiquity; Myth as a tool of persuasion in Plato; Review of Leonardo TarÃ¡n, Speusippus of Athens. Part II The Platonic Revival and the 2nd Century AD: Agreement and the self-evident in Philo of Larissa; The date of anon. In Theaetetum; Middle Platonism and the 7th Epistle; Logos and the development of Middle Platonism; Platonic interpretation in Aulus Gellius; Numenius Fr. 13 and Plato's Timaeus; Platonism before Plato: tracing a philosophy to ever earlier roots; The proximity of philosophy and medicine in the age of Galen; Shadows of justice in Apuleius' Metamorphoses. Part III Later Platonism: The Gorgias and the demiurge; More on Zeno's Forty Logoi; Olympiodorus and history; Restoring Olympiodorus' syllogistic; Politike Eudaimonia: Olympiodorus on Plato's Republic; Indexes.

Harold Tarrant is the Professor of Classics at the University of Newcastle, Australia

'It is [...] really detailed scholarship and argument combined with a stimulating general grasp of the development of ideas in their intellectual context which makes this collection such a pleasure to read and a most useful work of reference.' Aestimatio