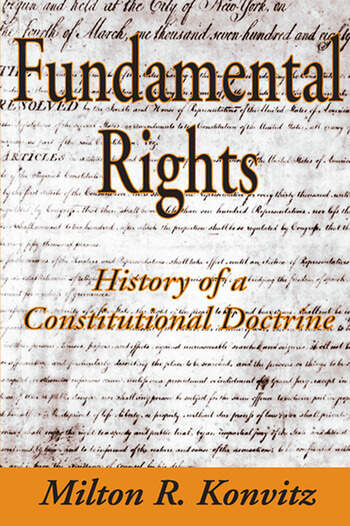 One of the most important modern developments in American constitutional law has been the extension of the Bill of Rights to the states. The most important guarantees of the first eight amendments have been incorporated into the Due Process Clause of the Fourteenth Amendment, along with the doctrine that these are rights that are so "fundamental" that any restriction is subject to judicial "strict scrutiny." The process has nationalized fundamental rights, giving them a preferred dignity and majesty. In this volume, the renowned constitutional scholar, Milton Konvitz, traces the development of fundamental rights from the early days of American jurisprudence through twentieth-century cases involving the right to privacy, racial discrimination, voting rights, censorship, and abortion laws.

In Konvitz's astute view, the Bill of Rights in the Constitution of the United States, like the Ten Commandments, places no priority among protected or guaranteed rights. He argues that values, ideals, rights, liberties, and privileges need to be placed in a hierarchical order or scale. The Supreme Court, acting on a case-by-case basis, has slowly and cautiously moved to designate some rights as superior to others. This idea that some rights are of a "fundamental" nature, while others are not, can be traced back to the early days of the nation's government. Konvitz shows that there may be said to be not one, but two or even three bills of rights, one for the Federal government and one for the States. Still another, may be an unwritten but evolving Bill of Rights. The Court has recognized rights or liberties that are in no written constitution, as for example, a right to marry, a right to have a family, a right to choose education of one's children in a private, even a religious, school, rather than a public school. In an illuminating fashion, Konvitz, whose writings have been cited in Supreme Court decisions, traces the controversial and very uneven line of development of such "fundamental rights."

This volume is likely the first book on the subject and a pioneering work in the history of American constitutional law. Accessibly written for a general and scholarly audience, it will be of particular interest to political scientists, historians, and constitutional scholars.