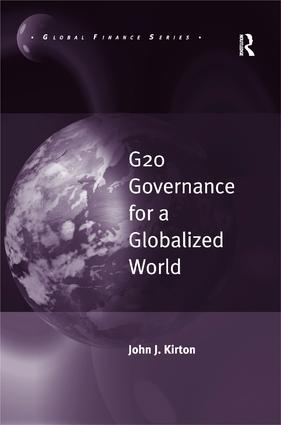 G20 Governance for a Globalized World

This book offers the most thorough, detailed inside story of the preparation, negotiation, performance, and achievements of G20 gatherings from their start at the finance level in 1999 through their rise to become leader-level summits in response to the great global financial crisis in 2008. Follow the moves of America’s George Bush and Barack Obama, Britain’s Gordon Brown and David Cameron, Canada’s Stephen Harper, Germany’s Angela Merkel, and other key leaders as they struggle to contain the worst global recession since the Great Depression of the 1930s. This book provides a full chapter-long account of each of the first four G20 summits from Washington to Toronto with summaries of the ensuing summits. It uses international relations theory to build and apply a model of systemic hub governance to back its central claim to show convincingly that G20 performance has grown to successfully govern an increasingly interconnected, complex, crisis-ridden, globalized twenty-first century world.

'The Group of 20 has become a crucial and influential actor in the financial, economic and gradually other sectors of global governance. Written by one of the foremost scholars in the field who has analyzed the G20 forum and its predecessors both empirically and theoretically for almost two and a half decades, this book provides a systematic, well-argued, comprehensive chronological examination of the G20, resting on a solid theoretical basis. It is a most valuable and welcome addition to literature on this complex subject. Reading it will benefit academics, students of international relations and policy-makers alike.' Peter I. Hajnal, University of Toronto, Canada 'This is the first serious book-length study of what is arguably the most important forum in the world, the G20. John Kirton's knowledge of this 'hub' of global governance is comprehensive and deeply nuanced. Based on extensive interviews, knowledge of the literature, and personal experience, G20 Governance for a Globalized World will generate keen attention from an extensive readership among both academics and practitioners.' Andrew F. Cooper, University of Waterloo, Canada and BSIA and Distinguished Fellow, The Centre for International Governance Innovation 'Anyone who knows John J. Kirton and his extensive work on global ’G-governance’ may agree with me that he is an authority in the field. G20 Governance for a Globalized World is an obvious demonstration of this fact … the book is an exceptionally neatly structured, well-documented scholarly account and excellent reading for those interested in global governance, international relations theory and the rapidly transforming international system in general terms. … G20 Governance for a Globalized World is a fundamental work for understanding the changing global scene with all its intertwined entities and processes, and one of the major sources for further research on global governance. … It is highly recommended not only to scholars, academi

The intensifying globalisation of the twenty-first century has brought a myriad of new managerial and political challenges for governing international finance. The return of synchronous global slowdown, mounting developed country debt, and new economy volatility have overturned established economic certainties. Proliferating financial crises, transnational terrorism, currency consolidation, and increasing demands that international finance should better serve public goods such as social and environmental security have all arisen to compound the problem. The new public and private international institutions that are emerging to govern global finance have only just begun to comprehend and respond to this new world. Embracing international financial flows and foreign direct investment, in both the private and public sector dimensions, this series focuses on the challenges and opportunities faced by firms, national governments, and international institutions, and their roles in creating a new system of global finance.