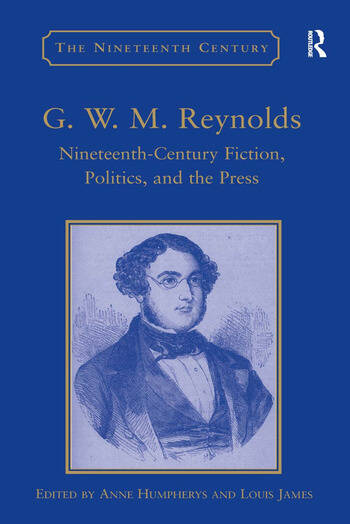 G.W.M. Reynolds (1814-1879) had a major impact on the mid-Victorian era that until now has been largely unacknowledged. A prolific novelist whose work had a massive circulation, and an influential journalist and editor, he was a man of contradictions in both his life and writing: a middle-class figure who devoted his life to working class issues but seldom missed a chance to profit from the exploitation of current issues; the founder of the radical newspaper Reynolds Weekly, as well as a bestselling author of historical romances, gothic and sensation novels, oriental tales, and domestic fiction; a perennial bankrupt who nevertheless ended his life prosperously. A figure of such diversity requires a collaborative study. Bringing together a distinguished group of scholars, this volume does justice to the full range of Reynolds's achievement and influence. With proper emphasis on new work in the field, the contributors take on Reynolds's involvement with Chartism, serial publication, the mass market periodical, commodity culture, and the introduction of French literature into British consciousness, to name just a few of the topics covered. The Mysteries of London, the century's most widely read serial, receives the extensive treatment this long-running urban gothic work deserves. Adding to the volume's usefulness are comprehensive bibliographies of Reynolds's own writings and secondary criticism relevant to the study of this central figure in mid-nineteenth-century Britain.

Anne Humpherys is Professor of English at Lehman College and the Graduate Center, City University of New York, USA, and Professor Louis James is Emeritus Professor in Victorian and Modern Literature at the University of Kent, UK.