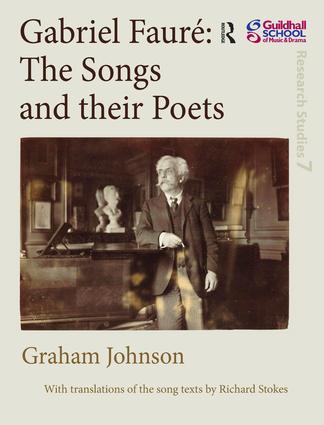 Gabriel Fauré: The Songs and their Poets

The career of Gabriel Fauré as a composer of songs for voice and piano traverses six decades (1862-1921); almost the whole history of French mélodie is contained within these parameters. In the 1860s Fauré, the lifelong protégé of Camille Saint-SaÃ«ns, was a suavely precocious student; he was part of Pauline Viardot's circle in the 1870s and he nearly married her daughter. Pointed in the direction of symbolist poetry by Robert de Montesquiou in 1886, Fauré was the favoured composer from the early 1890s of Winnarretta Singer, later Princesse de Polignac, and his songs were revered by Marcel Proust. In 1905 he became director of the Paris Conservatoire, and he composed his most profound music in old age. His existence, steadily productive and outwardly imperturbable, was undermined by self-doubt, an unhappy marriage and a tragic loss of hearing. In this detailed study Graham Johnson places the vocal music within twin contexts: Fauré's own life story, and the parallel lives of his many poets. We encounter such giants as Charles Baudelaire and Paul Verlaine, the patrician Leconte de Lisle, the forgotten Armand Silvestre and the Belgian symbolist Charles Van Lerberghe. The chronological range of the narrative encompasses Fauré's first poet, Victor Hugo, who railed against Napoleon III in the 1850s, and the last, Jean de La Ville de Mirmont, killed in action in the First World War. In this comprehensive and richly illustrated study each of Fauré's 109 songs receives a separate commentary. Additional chapters for the student singer and serious music lover discuss interpretation and performance in both aesthetical and practical terms. Richard Stokes provides parallel English translations of the original French texts. In the twenty-first century musical modernity is evaluated differently from the way it was assessed thirty years ago. Fauré is no longer merely a 'Master of Charms' circumscribed by the belle époque. His status as a great composer of timeless

'There aren't enough superlatives in my vocabulary for the task at hand; we'd need a francophile Shakespeare to do this book justice. At last, Fauré receives the kind of thoroughgoing advocacy he has long deserved - and it could only come both from a musician who knows this oeuvre inside out from years of playing and teaching it, and a scholar who has absorbed all of the literature on and autour de Fauré. What Johnson uniquely does is to ground all that Fauré-ness in a detailed, practical, feet-on-the-ground examination of the songs, contextualized and explained in exquisite detail. To cap it all off, I gulped down this book as if it were a particularly entrancing novel because it is written to the hilt. What I find most compelling is the very serious intensity of Johnson's mission: to inform music-lovers about everything - the historical context, the poets, the events of Fauré's life, his composer's opinions on a wide variety of matters, his unique tonal language - pertaining to these very great, and little-understood, songs. This book is crammed to the gills with information, all of it valuable. All lovers of French music will wonder what they ever did before this book became available.' -Susan Youens, J.W. Van Gorkom Professor of Music, University of Notre Dame, USA ’No better guide … could be found than Graham Johnson, one of our leading accompanists and someone whose knowledge of the entire song repertoire would be hard to match. As a performer who has spent a lifetime interpreting this music … Johnson knows it inside out. But he also possesses a deep understanding of each song’s position within Fauré’s own life, and indeed within the wider French cultural environment as a whol e… Richard Stokes’s translations of the texts aligned with the originals are an added bonus … an ideal guide to one of the most important figures in the song repertoire, valuable to performers and listeners alike.’ BBC Music Magazine ’… an excellent survey co

Contents: Foreword; Songs through life: an overview; An indifference to success; Second empire and first songs; War and peace on Parnassus; Chez Mmme P. Viardot-Garcia;1878, a transitional year of song; Bachelor and husband - the Silvestre years; Crisis and decadence; Fauré and Paul Verlaine (I); Fauré and Paul Verlaine (II); Crossing the divide - towards the late style; Interlude: the silent gift; Fauré and Charles van Lerberghe (I); Fauré and Charles van Lerberghe (II); Mirages and horizons; Some notes on the performance of Fauré's songs; The pianists workshop (wherin singers are always welcome); Appendices; Indexes.

Graham Johnson’s career as a distinguished concert accompanist has always encompassed his activities as a scholar of song and planner of recital programmes. Founder of the Songmakers’ Almanac, he has written the notes for his recordings of the complete songs of Schubert and Schumann. Author of A French Song Companion and Britten: Voice and Piano (the latter for Ashgate) he has masterminded Hyperion Record’s French Song Edition, including the complete Chabrier and Fauré songs. He was appointed OBE in 1994 and Chevalier de l’ordre des arts et des lettres in 2002. He is Senior Professor of accompaniment at the Guildhall School of Music and Drama in London.

Books in this series are co-published by Ashgate and the Guildhall School of Music and Drama, London, UK. Titles published are as a result of research carried out by staff at the Guildhall or by their associates.