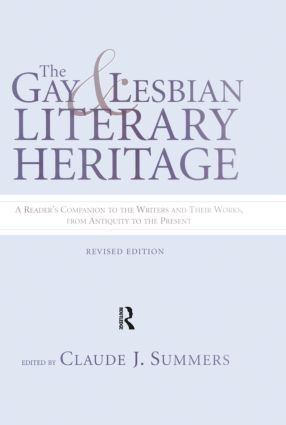 The revised edition of The Gay and Lesbian Literary Heritage is a reader's companion to this impressive body of work. It provides overviews of gay and lesbian presence in a variety of literatures and historical periods; in-depth critical essays on major gay and lesbian authors in world literature; and briefer treatments of other topics and figures important in appreciating the rich and varied gay and lesbian literary traditions. Included are nearly 400 alphabetically arranged articles by more than 175 scholars from around the world. New articles in this volume feature authors such as Michael Cunningham, Tony Kushner, Anne Lister, Kate Millet, Jan Morris, Terrence McNally, and Sarah Waters; essays on topics such as Comedy of Manners and Autobiography; and overviews of Danish, Norwegian, Philippines, and Swedish literatures; as well as updated and revised articles and bibliographies.

"The writing is informative but also provocative, critical and yet consistently accurate and inclusive in the selection of works discussed." -- Library Journal

"Comprehensive in scope, taking us from ancient to contemporary times and treating each topic with an admirable thoroughness, this is the first edition of what I predict will become an authoritative record for an expanding 'literary heritage'." -- Richard Schneider Jr., editor of The Harvard Gay and Lesbian Review

"This remarkable volume contains essential reading for gay people seeking evidence of ancient roots and roles--and for anyone else who wants a more complete picture of the origins of literary endeavor than formal education usually offers." -- Lisa Alther, author of Kinflicks and Five Minutes in Heaven

"It is dedicated to the recovery, consolidation, and document of the diverse legacies of same sex love in literature, and the 150-plus scholars from around the world who ahve authored these articles should be proud to have contributed so successfully to that mission." -- Library Journal, G. Douglas Meyers

Claude J. Summers is William E. Stirton Professor in the Humanities and Professor of English at the University of Michigan, Dearborn. He has written widely on 17th-century English literature; written book-length critical studies on Christopher Marlowe, E. M. Forster, and Christopher Isherwood; and is the author of Gay Fictions: Wilde to Stonewall. He received the Lambda Literary Award for the first edition of The Gay and Lesbian Literary Heritage.