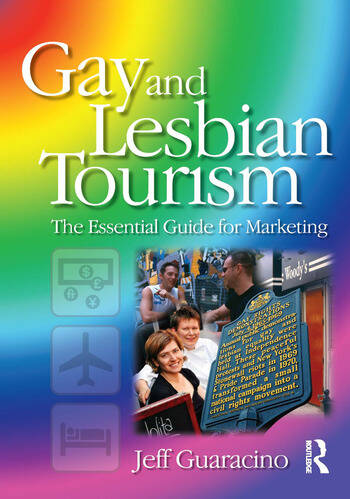 This unique introductory resource provides a broad foundation of knowledge on the gay and lesbian market segment. Topics and themes are illustrated by interviewing the top professionals in gay travel and gay media who share their experience, tips for success and future predictions. Packed with best case examples and practices of existing gay tourism initiatives and campaigns, this engaging text provides analysis and context that addresses some of the burning questions in this area, including the potential negative consumer and stakeholder reaction, and strategies to educate the local hospitality community.

IX. Introduction to gay and lesbian tourismThis chapter will provide an overview of the gay and lesbian tourism market. The chapter will dispel myths of gay consumers and define the gay tourism segment as leisure, group, convention and business. The impact on travel agents, hotels, cruise lines and destinations will be discussed. Most importantly, an argument will be presented that the market is actually two distinct segments: gay men and lesbians. X. Research: The demographic and economic profileThis section will present the economic and demographic profile of the gay and lesbian travelers by presenting ground-breaking travel research information and analysis from: the Travel Industry of America (limited), Community Marketing, Inc., LPI Media, two Philadelphia studies, in addition to the consumer power of gay and lesbian consumers from Witek-Combs. This chapter will also present the barriers to gathering marketing information on gays and lesbians from traditional research resources including the U.S. Census, Longwoods, D.K. Shifflet, Global Insight, Neilson and Scarboro research firms. Illustrations will include graphs, charts and tables. The author will interview experts in gay tourism research from the previously listed firms. XI. What makes a destination or travel product gay-friendly?What does it mean to be gay-friendly? The section will discuss defining the reader’s tourism product. It will ask the reader to candidly assess their gay-friendly hotels, gay festivals and mainstream events. The chapter will also address taking a mainstream travel product and making it gay-friendly. The chapter will discuss the various segments including outdoors, cruises and resorts. The author will interview Meryl Levitz, president and CEO of the Greater Philadelphia Tourism Marketing Corporation and Charlie Rounds, founder of RSVP Cruises. Illustrations: pictures of Women’s Week in Provincetown, Equality Forum in Philadelphia, Gay Pride in Toronto, Gay Games in Sydney, Australia and Gay Days at Disney World. XII. Marketing: Starting your own tourism campaign The section will begin with establishing goals for gay tourism marketing campaigns (economic, social, etc.). It will offer effective strategies for print, television and online media using real gay and lesbian advertising as examples. Also to be discussed: the role of public relations; effective brochures; strategic promotions; tips on choosing the right agency; creating a travel guide, creating a budget, and building Internet traffic and databases. The author will interview former Advertising Age Journalist Michael Wilke who is head of the Commercial Closet, Inc, a non-profit resource that specializes in gay and lesbian portrayals in TV commercials worldwide over the last 30 years. Illustrations will include the best examples of advertising, brochures and Web sites. XIII. Building stakeholder supportThis chapter will explore strategies for building support among various stakeholders including politics, boards and broader hospitality industry. An emphasis will be placed on the role of the local GLBT community as an advisory group and the growing influence of gay and lesbian chambers of commerce. Best practice examples will focus on the Philadelphia Gay Tourism Caucus, the Toronto Gay Business Guild and the Ft. Lauderdale Gay Business Guild. The author will interview Richard Gray (Ft. Lauderdale) and Tami Sortman (Philadelphia), among others. XIV. Overcoming challengesHow will readers measure the effectiveness of gay tourism campaigns? Measurement is highly dependent on those openly gay travelers who choose to use gay discount codes, buy special gay hotel packages and book gay vacations, such as on an RSVP Cruise. This chapter will present innovative approaches that destination marketing organizations and corporations are using to measure the effectiveness of marketing programs. The author will interview executives at Logo, Viacom’s new television network, Target 10, a New York based marketing company with Fortune 500 clients and Rivendale, a media representative for the major gay newspapers in the United States.XV. Future Trends Gay and lesbian travel is one of the fastest growing segments and many mainstream travel companies and destinations are entering into the gay market. This chapter will present the predictions of some of the travel industry’s top professionals including the editor of Travel Weekly, Tom Roth, president of Community Marketing, Inc., and Matthew Link, editor of Out Traveler magazine. XVI. Terminology: Getting it straight The chapter will be presented as a glossary and include entries on words and phrases that have become common and will help the reader become familiar with the appropriate usage. It will also include an expanded contact list of lesbian, gay, bisexual and transgender organizations, with Web sites, e-mail and mailing addresses and phone numbers. This chapter will use as resources such as the National Lesbian and Gay Journalists Association, the National Gay and Lesbian Task Force as well as other GLBT organizations.

“If you are even thinking of navigating the ever-growing gay travel market, Guaracino’s book is your must-have marketing roadmap. Gay and Lesbian Tourism is chockablock with actionable advice from the pioneers in gay travel, who will help you avoid all-too-common pitfalls and position your gay tourism campaign for success.”Ed Salvato, Editor in Chief, The Out TravelerCorporate Director, Travel Media at Planet Out Inc. “We applaud Jeff Guaracino and his efforts to provide companies news to the GLBT market with a guide for market success. In 2006, we were able to track well over $5 million in business from the gay and lesbian community, and we know that number is much higher if you count community members that have not yet identified themsevles through our customer loyalty programs.” Michael Depatie & Niki Leondakis, Kimpton Hotels and Restaurants “Marketers must not forget that people want to be invited. For gay and lesbian travelers who aren’t sure if they are going to be welcomed for who they are, an invitation is definitely needed.” Meryl Levitz, President and CEO, Greater Philadelphia Tourism Marketing Corporation “Gay and lesbian tourism is a global business and the competition is growing rapidly for GLBT meetings, conventions, sporting competitions and leisure visitors. Investing in a smart marketing program can enhance your image in the world marketplace and give your destination an advantage.” Honourable Charles Lapointe, President and CEO, Tourisme Montréal, Chairperson of the CTC Board of DirectorsGay and lesbian consumers comprise a powerful emerging segment that serious travel marketers cannot ignore. Central to our success in marketing to gay and lesbian travelers has been a core belief that policies of fairness and inclusion must be consistent, both inside and outside our company. Jeff Guaracino’s new book underscores that effective marketers know their promise is hollow if workplace policies are not fair for LGBT employees. Dan Garton, Executive Vice President-Marketing, American Airlines