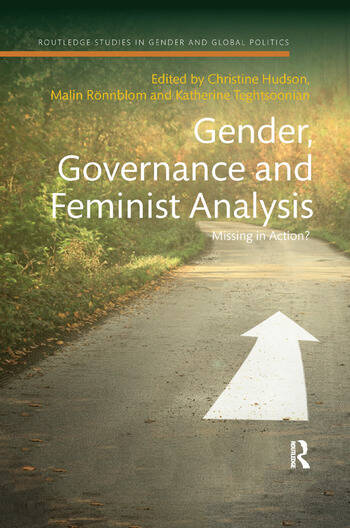 This edited volume presents critical scholarship analysing governance practices in diverse jurisdictions in Europe and North America, at multiple scales, and in relation to several different arenas of policy and practice. The contributors address shortcomings in the mainstream literature on governance within the discipline of political science.

The volume as a whole is marked by geographical and topical diversity. However, what the individual chapters have in common is that each considers whether and how gender, racialized identity, and/or other axes of marginalization are visible within the conceptualizations and/or practices of governance under discussion.

Drawing together insights and conceptual tools from both feminist and post-structuralist frameworks in analysing governance practices, this volume will be of great interest to scholars and graduates who engage with feminist and/or post-structural analysis of policy and governance. It will also be of use to critical policy scholars in anthropology, geography, sociology, and women’s studies.

1. Introduction: Missing in action?  2. Re-gendering governance in times of austerity: dilemmas of feminist research, theory and politics  3. Affective governmentality – A feminist perspective  4. Mainlining the motherboard: The paradox of gendered academic labour in the university  5. Problematization as performative practice: An analysis of articles on gender and innovation  6. Unsettling neoliberlism? Governmentality, feminist analysis and problematizations of workers’ mental health  7. Complaints, gender and power in governing education  8. Situating agency in the context of the post-political city?  9. Analysing power at play: (re-)doing an analytics of the political in an era of governance  10. Epilogue: A three-dimensional feminist post-structuralist analysis

Christine Hudson is a Professor in Political Science at Umeå University, Sweden. She has researched on a wide number of policy areas including city planning and urban and regional policy particularly from a feminist perspective. She has worked with emotional and visual dimensions in studying women’s citizenship in the city and in relation to feelings of fear and safety. Among her recent publications are "Sharing Fairly? Mobility, Citizenship, and Gender Relations in Two Swedish City-Regions, Journal of Urban Affairs, 2017.

Malin Rönnblom is an Associate Professor in Political Science and a Senior Lecturer in Gender Studies, dividing her time between Karlstad and Umeå Universities, both in Sweden. Her main research interests are related to critical policy studies, rural and urban studies, as well as feminist political theory. Among her recent publications in English are: "Planning the new city – emotional reactions and positions", in Emotions, Space and Society, 2016, with Linda Sandberg, and "Contesting feminist discursive institutionalism – a poststructural alternative" in NORA, 2014, with Carol Bacchi.

Katherine Teghtsoonian is Professor Emerita at the University of Victoria, Canada. Her research has explored neoliberalism and its complex relationships with public and organizational policies in diverse empirical fields. Journals in which her work has been published include Critical Policy Studies, International Journal of Political Science, Politics and Gender, Signs: A Journal of Women in Culture and Society and Social Science & Medicine.