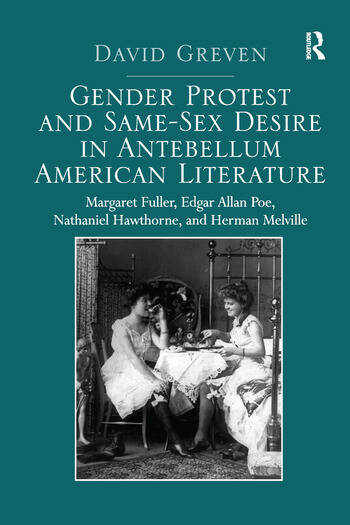 Expanding our understanding of the possibilities and challenges inherent in the expression of same-sex desire before the Civil War, David Greven identifies a pattern of what he calls ’gender protest’ and sexual possibility recurring in antebellum works. He suggests that major authors such as Margaret Fuller, Edgar Allan Poe, Herman Melville, and Nathaniel Hawthorne consciously sought to represent same-sex desire in their writings. Focusing especially on conceptions of the melancholia of gender identification and shame, Greven argues that same-sex desire was inextricably enmeshed in scenes of gender-role strain, as exemplified in the extent to which The Narrative of Arthur Gordon Pym depicts masculine identity adrift and in disarray. Greven finds similarly compelling representations of gender protest in Fuller’s exploration of the crisis of gendered identity in Summer on the Lakes, in Melville’s representation of Redburn’s experience of gender nonconformity, and in Hawthorne’s complicated delineation of desire in The Scarlet Letter. As Greven shows, antebellum authors not only took up the taboo subjects of same-sex desire and female sexuality, but were adept in their use of a variety of rhetorical means for expressing the inexpressible.

David Greven is Associate Professor of English at the University of South Carolina. His other books include The Fragility of Manhood, Psycho-Sexual, and Men Beyond Desire.

'In his study of antebellum American literature, David Greven discovers same-sex desire lurking in places and texts where it has not been previously recognized. Making the intriguing and potentially controversial claim that racial difference and conflict can often mask other forms of difference, he is especially provocative in his analyses of the centrality of deviant or queer sexualities in Redburn and The Scarlet Letter.'

'... Greven’s painstaking excavation of hidden motives and desires-while startling at first glance-is often ingenious and convincing. ... for those willing to take up the challenge, the reward is a perceptive, subtly radical, and ultimately quite persuasive study.'

'... a well-researched, highly suggestive study of how the era’s authors found ways to discuss what was prohibited by decorum. ... Greven’s Gender Protest and Same-Sex Desire in Antebellum American Literature is a provocative intermixing of historical and psychoanalytic investigation that opens up new possibilities for discovering nonnormative gender and sexuality in nineteenth-century works.'

'This is a carefully crafted and clearly written study that contributes a much-needed piece to discussions of gender, sexuality, and race ... Greven’s book offers readers a new and significant vocabulary for same-sex desire in the nineteenth century.'

'In the densely populated field of gender and queer studies of literature, this book stands out both for its ambitious scope and its efforts to combine readings of canonical 19th-century American authors with the history of sexuality and classic and post-Freudian psychoanalysis ... The book is rich in fine analyses and brilliant suggestions.'

'Greven is an exceptionally strong close reader with a rich critical imagination. His writing is perfectly clear, working through complex theoretical material with an engaging and original voice... this volume has much to offer anyone interested in gender and sexuality in antebellum American literature. Combining a clear intervention into methodological contentions in sexuality studies with solid textual analysis that reveals provocative new dimensions of even the most familiar works of the American Renaissance, this book is successful in its bid to 'reopen the question of what could constitute queer desire in antebellum literature-- reopen it and leave it ajar' (223).'

'The book is a veritable treasure trove of what could be considered queer in the 1840s. By reading lesser-known works by canonical authors, Greven significantly expands our repertoire of sources for exploring nineteenth-century queerness--this alone should draw in a broad audience. Read alongside recent works by Dana Luciano and Peter Coviello, Greven's book also helps develop a new conceptual language for sex and queerness in the nineteenth century.'
The Journal of the History of Sexuality

'In this densely researched and provocative book, David Greven seeks to reinsert psychoanalytic theories of gender and desire into critical debates about nineteenth-century US sexualities that predate the emergence of our modern sexual categories as theorized by Foucault. ... All of his readings are compelling... Greven's book makes a useful and important intervention in both the history of sexuality and American literary studies.'
Studies in the Novel