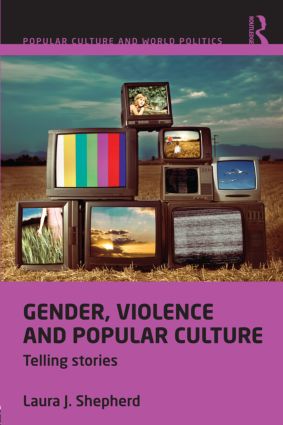 This book examines the intersection of gender and violence in popular culture. Drawing on the latest thinking in critical international relations, media and cultural studies and gender studies, it focuses in particular on a number of popular TV shows including Angel, Buffy the Vampire Slayer, Firefly, Generation Kill, The Corner and The West Wing.

The book makes a unique theoretical contribution to the ‘narrative turn’ in International Relations by illustrating the ways in which popular culture and global politics are intertwined and how we make sense of our worlds through these two frames. Methodologically, the book enhances discourse-theoretical analysis in IR through its incorporation of methods from narratology and film studies. The book proposes an aesthetic ethicopolitical approach to global politics which challenges us to interrogate how it becomes possible that we think what we think, it challenges the truths that we hold to be self-evident and that which we take to be common sense. It demands that we think carefully, critically, uncomfortably, about our world(s) – even when we’re ‘only’ watching television.

Drawing on a sophisticated theoretical framework, Shepherd finds in the realm of the everyday the possibility to think critically about the world we live in. She opens up a realm of investigation – television shows – that have so far largely eluded international relations scholars. But Shepherd convincingly shows how links between gender and violence are part of global power relations that come into being through the stores we tell; stories that become real because they are rehearsed, time and again, as part of dominant and largely masculine ways of understanding sexuality, identity and community.

1. Telling stories: An essay on gender, violence and popular culture 2. Morality, legality and gender violence in Angel 3. Policing the boundaries of desire in Buffy the Vampire Slayer 4. Gender, ethics and political community in Generation Kill 5. Feminism and political strategy in The West Wing 6. Gender, violence and security in Oz 7. Security and governance after modernity in Firefly 8. Hope and the politics of natality in The Corner 9. Points de capiton: Aesthetics, ethics and critique

Laura J. Shepherd is a Senior Lecturer in the Department of Political Science and International Studies at the University of New South Wales, Australia

The Popular Culture World Politics (PCWP) book series is the forum for leading interdisciplinary research that explores the profound and diverse interconnections between popular culture and world politics. It aims to bring further innovation, rigor, and recognition to this emerging sub-field of international relations.

To these ends, the PCWP series is interested in various themes, from the juxtaposition of cultural artefacts that are increasingly global in scope and regional, local and domestic forms of production, distribution and consumption; to the confrontations between cultural life and global political, social, and economic forces; to the new or emergent forms of politics that result from the rescaling or internationalization of popular culture.

Similarly, the PCWP series wishes to provide a venue for work that explores the effects of new technologies and new media on established practices of representation and the making of political meaning. It encourages engagement with popular culture as a means for contesting powerful narratives of particular events and political settlements as well as explorations of the ways that popular culture informs mainstream political discourse. The PCWP series promotes investigation into how popular culture contributes to changing perceptions of time, space, scale, identity, and participation while establishing the outer limits of what is popularly understood as ‘political’ or ‘cultural’.

In addition to film, television, literature, and art, the PCWP series actively encourages research into diverse artefacts including sound, music, food cultures, gaming, design, architecture, programming, leisure, sport, fandom and celebrity. The series is fiercely pluralist in its approaches to the study of popular culture and world politics and is interested in the past, present, and future cultural dimensions of hegemony, resistance and power.