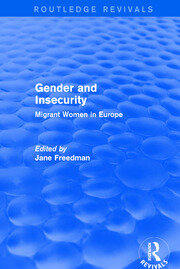 This title was first published in 2003. Migration is a phenomenon which is at the heart of global politics and, within the EU, governments are continually trying to reinforce their controls of migration. These controls, designed to increase the security of European populations may, however, have the adverse effect of increasing the insecurity of migrants. This is particularly true for the many women who migrate to Europe and find themselves in insecure positions because of their lack of independent legal status, the difficulty of access to adequate health and social security provision and their particular vulnerability to both domestic and institutional forms of violence. They are often in economically weak positions, either unemployed or in badly paid part-time or domestic jobs with no forms of social protection. Gender and Insecurity addresses these various forms of insecurity and details ways in which they might be addressed. Further, it looks at the ways in which immigrant women have themselves tried to fight against these insecurities through their own political mobilisation.

Jane Freedman is a Lecturer in Politics within the Department of Politics, at the University of Southampton, UK.

'This edited volume is a collection of very well written and well researched chapters (some by authors who are activist-researchers) and offers rich insights into the situation of women migrants in the south of Europe...All chapters are very interesting and enjoyable to read.' Journal of Population Research