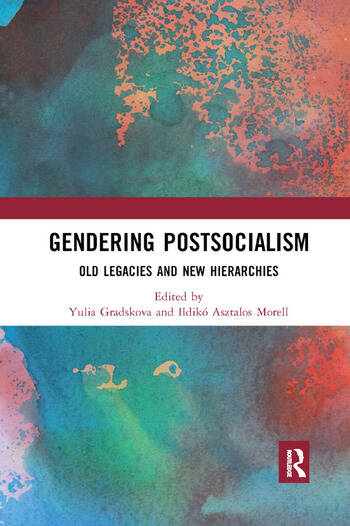 Gendering Postsocialism explores changes in gendered norms and expectations in Eastern Europe and Eurasia after the fall of the Berlin Wall. The dismantlement of state socialism in these regions triggered monumental shifts in their economic landscape, the involvement of their welfare states in social citizenship and, crucially, their established gender norms and relations, all contributing to the formation of the postsocialist citizen.

Case studies examine a wide range of issues across 15 countries of the post-Soviet era. These include gender aspects of the developments in education in Kazakhstan, Uzbekistan and Hungary, controversies around abortion legislation in Poland, migrant women and housing as a gendered problem in Russia, challenges facing women’s NGOs in Bosnia, and identity formation of unemployed men in Lithuania. This close analysis reveals how different variations of neoliberal ideology, centred around the notion of the self-reliant and self-determining individual, have strongly influenced postsocialist gender identities, whilst simultaneously showing significant trends for a “retraditionalising” of gender norms and expectations.

This volume suggests that despite integration with global political and free market systems, the postsocialist gendered subject combines strategies from the past with those from contemporary ideologies to navigate new multifaceted injustices around gender in Eastern Europe and Eurasia.

Chapter 1 The gendered subject of postsocialism: state-socialist legacies, global challenges and (re)building of tradition; Part 1 New gendered geographies; Chapter 2 "They are hardly feminists and could learn a lot": Swedish-Bosnian encounters for gender equality and peace, 1993–2013; Chapter 3 Elderly care in Russia and sidelka from Central Asia; Chapter 4 Around the corner? Female empowerment, security, and elite mind-sets in Georgia; Part 2 Neoliberal governance and the gendered enterprising self; Chapter 5 Russian hostesses in Japan: a way towards self-fulfilment?; Chapter 6 Postsocialist gender failures: men in the economies of recognition; Chapter 7 "A mom who has time for everything": mothers between work and family in contemporary Ukraine; Chapter 8 The agency of a Roma women’s NGO in marginalised rural municipalities in Hungary; Part 3 Resilient legacies of state socialism; Chapter 9 "Women have always had harder lives": gender roles and representations of the self in the oral recollections of older Czech women; Chapter 10 Home is the "place of women’s strength": gendering housing in Soviet and post-Soviet Russia; Chapter 11 Post-Soviet legacies in girls’ education in Kazakhstan and Uzbekistan; Part 4 The postsocialist societies between marketisation, democratisation and retraditionalisation; Chapter 12 "Gender restoration" and "masculinisation" of political life in Poland: the controversies over the abortion legislation after 1989; Chapter 13 Obstacles for women in technical higher education in Hungary; Chapter 14 Gendered identities among medical professionals in postsocialist Russian cinema; Index

Yulia Gradskova, Södertörn University, Sweden, is a historian dealing with post-Soviet history. She is the co-author of Gender Equality on a Grand Tour (2017 – with E.Blomberg, Y.Waldemarson, A.Zvinkliene) and the co-editor of And They Lived Happily Ever After (2012 – with H.Carlbäck and Zh.Kravchenko).

Ildikó Asztalos Morell, sociologist from Mälardalen and Uppsala University (Sweden) with an interest in rural, gender and ethnicity studies of transition societies. She is the author of Emancipation’s Dead-End Roads (1999) and co-editor of Gender Regimes, Citizen Participation and Rural Restructuring (2008 – with B.Bock).