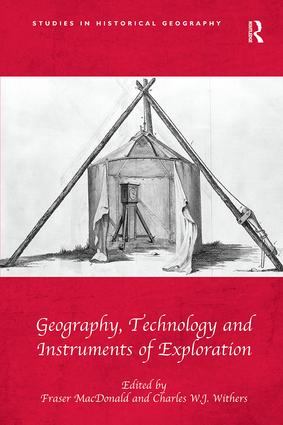 Geography, Technology and Instruments of Exploration

Focusing on aspects of the functioning of technology, and by looking at instruments and at instrumental performance, this book addresses the epistemological questions arising from examining the technological bases to geographical exploration and knowledge claims. Questions of geography and exploration and technology are addressed in historical and contemporary context and in different geographical locations and intellectual cultures. The collection brings together scholars in the history of geographical exploration, historians of science, historians of technology and, importantly, experts with curatorial responsibilities for, and museological expertise in, major instrument collections. Ranging in their focus from studies of astronomical practice to seismography, meteorological instruments and rockets, from radar to the hand-held barometer, the chapters of this book examine the ways in which instruments and questions of technology - too often overlooked hitherto - offer insight into the connections between geography and exploration.

’Inquisitive scientific travellers have long depended on robustly reliable hardware to turn their remarkable experiences into convincing reports. This impressive collection makes sense of how such devices work and offers a major challenge to images of the solitary voyagers of past sciences. The book is stocked with revealing stories of these mobile instruments' very wide range of uses, tales of frustration and improvisation as well as of triumph and success.’ Simon Schaffer, University of Cambridge, UK ’The story of scientific exploration has often been reduced to the heroism, or duplicity, of explorers. In this book, it is instead the instruments of science that are centre-stage, from the humble compass to the space-age rocket. Through a variety of studies of technology, both as used and as imagined, this book opens a new chapter in the historical geography of science.’ Felix Driver, Royal Holloway, University of London, UK ’Traditional histories of scientific exploration are typically only about humans; their often epic bodily exertions, and mental breakthroughs. This excellent collection of essays rightly shifts the emphasis to the role of material things: devices, instruments, machines, tools, books of tables, photos, and clothing. None are mere background props. Instead, they are the very stuff of scientific exploration.’ Trevor Barnes, University of British Columbia, Canada

Fraser MacDonald is Lecturer in Historical Geography at the University of Edinburgh. He is currently working on a book-length history of rocketry in the mid twentieth century, in which the placing of instruments in outer space is a key episode. He co-edited Observant States: Geopolitics and Visual Culture (I B Tauris, 2010) with R. Hughes and K. Dodds. Charles W.J. Withers is Ogilvie Professor of Geography at the University of Edinburgh. He is the author of nine research monographs including Geography, Science and National Identity: Scotland since 1520 (Cambridge, 2001), Placing the Enlightenment: Thinking Geographically about the Age of Reason (Chicago, 2007), and Geography and Science in Britain, 1831-1939: A Study of the British Association for the Advancement of Science (Manchester, 2010), and co-editor of a further eight volumes. His co-authored Scotland: Mapping the Nation (Birlinn, 2011) won the Saltire Society Research Book of the Year in 2012.