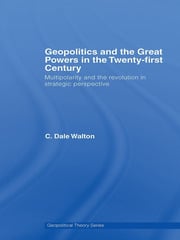 Geopolitics and the Great Powers in the 21st Century: Multipolarity and the Revolution in Strategic Perspective

This book argues that in the twenty-first century Eastern Eurasia will replace Europe as the theatre of decision in international affairs, and that this new geographic and cultural context will have a strong influence on the future of world affairs.

For half a millennium, the great powers have practised what might be called ‘world politics’, yet during that time Europe, and small portions of the Near East and North Africa strategically vital to Europe, were the ‘centres of gravity’ in international politics. This book argues that the ‘unipolar moment’ of the post-Cold War era will not be replaced by a US-China ‘Cold War’, but rather by a long period of multipolarity in the twenty-first century. Examining the policy goals and possible military-political strategies of several powers, this study explains how Washington may play a key role in eastern Eurasian affairs if it can learn to operate in a very different political context. Dale Walton also considers the rapid pace of technological change and how it will impact on great power politics. Considering India, China, the US, Russia, Japan, and other countries as part of a multipolar system, he addresses the central questions that will drive US policy in the coming decades.

Geopolitics and the Great Powers in the 21st Century will be of interest to students of international security, military history, geopolitics, and international relations.

Introduction: New Powers and Old Politics  Mackinder and the Cold War.  The Death of the Columbian Epoch.  The Post-Columbian Epoch.  The Center of the Action.  The Revolution in Strategic Perspective.  The Argument  Part 1: Geopolitics in an Uncertain World: The Case for Classical Geopolitics  An Unearned Infamy:  The Reputation of Classical Geopolitics.  Geopolitics as Counsel.  The Usefulness of Classical Geopolitics.  The Enduring Relevance of Geography.  A Twenty-First Century Geopolitics.  The Post-Columbian Epoch.  Conclusion: Capturing the New Epoch  Part 2: The Geography of Universal Empire - The Geopolitics of the Columbian Epoch  Seeing One World, Whole.  Strategic Culture and Geography.  Strategic Learning and the Post-Columbian Epoch.  The Stakes: Why the Politics of Eastern Eurasia are of Global Importance.  Conclusion  Part 3: The Grand Casino Reopens:  Multi-Polarity and International Politics  The Short Half-Life of Unipolarity.  The Character of Multipolarity.  Beyond Bipolarity:  The Balancing of China.  The American Factor Nightmare:  The Possibility of a Great Power Axis.  Great and Small Power Interactions.  Conclusion  Part 4: Leviathan Slimming: Guarding American Interests in a Multipolar Environment  The Second American RMA.  The Danger of Resting on Laurels.  Rogues and Suckers: The Challenges of Preeminence.  Leaving the Beltway:  Moving Beyond Multipolarity.  Comparing Nineteenth-Century Britain and the Twenty-First Century United States.  Conclusion  Part 5: Strategizing Without a License: The Non-State Challenge to World Order  The Islamist Threat in Context.  Rise of the Lilliputians.  The Great Powers and the Terrorists.  Conclusion  Part 6: Strategy 2.0: Great Power Competition in an Era of Technological Revolution  Faster, Cheaper, Better: The Technological Explosion.  The RSP and the Next Revolution in Military Affairs.  A Thought Experiment:  The Military Application of Artificial Intelligence to Airpower.  The Case for Technological Exuberance.  Conclusion.  Geopolitics and the Revolution in Strategic Perspective