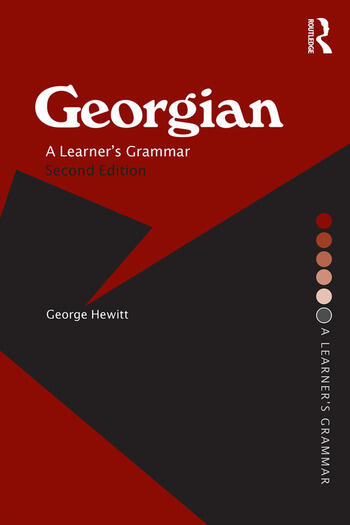 This second edition of Georgian: A Learner's Grammar is a completely revised and updated guide to the fascinating and most widely spoken language of the Caucasus.

Presenting the language in the form of dialogues and reading passages, full attention is given to script reproduction and recognition, pronunciation, lexis and individual points of grammar.

With a varied and extensive range of exercise work, this new edition provides a comprehensive and carefully graded grammar of Georgian that has been successful over a number of years of use in the classroom.

Lesson 2. The plural of nouns; The Dative case; The Genitive case; Declensions and Demonstratives; Adjective agreement with Datives and Genitives; Preverbs; Numbers; Telling the time; Days of the week; Months of the year; The Present tense of the verbs 'to stand up’, ‘to lie down’, ‘to sit down'; Names denoting common relationships and possessives

Lesson 3. Asking about and stating one's age; The comparative and superlative grades of adjectives and adverbs; The Instrumental case; Adjective agreement with the Instrumental; Postpositions; Subject-agreement markers within the verb for intransitive subjects

Lesson 4. The division of the tense-system; Subject and direct object case marking and verbal agreement for; Series I transitives; Word-order; Transitive verbs in the present indicative; Neutral Version; Verb-agreement with 3rd person plural subjects; Syncope of  -o- in nouns; The Adverbial case of nouns; Adjective agreement with nouns in the Adverbial case; The postposition –mde up to

Lesson 13. Stative Verbs; The Indirect Verbs; How to say 'X wants to (VERB)' and 'X can (VERB)'; How to express the notion 'convey'; How to say 'know' in the future indicative; Forms of the more important stative verbs

‘There is no doubt that this book is necessary and unique. It has no serious rival.’ -Donald Rayfield, Queen Mary College, University of London, UK