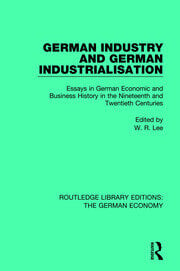 German Industry and German Industrialisation: Essays in German Economic and Business History in the Nineteenth and Twentieth Centuries

Originally published in 1991 this book brings together 9 essays which address a number of central issues relating to the nature of German industrialisation, including the role of foreign competition in fostering technological change, the importance of market integration for economic development and the response of German banks to industrialisation. The book also provides an important corrective to the traditional interpretation of German industrialisation and reassesses the economic impact of the customs union (Zollverein). The reappraisal of some dominant themes in German economic and business history is distinctive in its explicit use of economic theory in historical analysis of long-term growth processes. It also emphasises the importance of sectoral analysis and illustrates the usefulness of a differential regional approach for understanding the process of German industrialisation.

1. The Paradigm of German Industrialisation: Some Recent Issues and Debates in the Modern Historiography of German Industrial Development Robert Lee 2. Foreign Competition and Technological Change: British Exports and the Modernisation of the German Iron Industry from the 1820s to the 1860s Rainer Fremdling 3. Tariffs and Market Structure: The German Zollverein as a Model for Economic Integration R. H. Dumke 4. Banking and Economic Growth: Banks and Industry in Germany in the Nineteenth-Century and their Changing Relationship During Industrialisation Wilfried Feldenkirchen 5. Cyclical Trends and the Market Response: Long Swings in Urban Development in Gey, 1850-1914 Richard Tilly 6. Sectoral Performance and Economic Development: The Backward Linkages of the German Pig-Iron Industry, 1871-1913, As a Factor in Macro-Economic Growth Jochen Krengel 7. 'New Industries' and the Role of the State: The Development of Electrical Power in South Germany from c.1880 to the 1920s Hermann Schaefer 8. The Political Framework of Structural Modernisation: The I. G. Farbenindustrie AG, 1904-1945 Gottfried Plumpe 9. Germany and the International Economy: The Role of the German Inflation in Overcoming the 1920/1 United States and World Depression Carl L. Holtfrerich 10. Occupation Policy and Post-War Reconstruction: British Manpower Policy in the Ruhr Coal-Mines, 1945-1947, and West Germany Recovery Mark Roseman