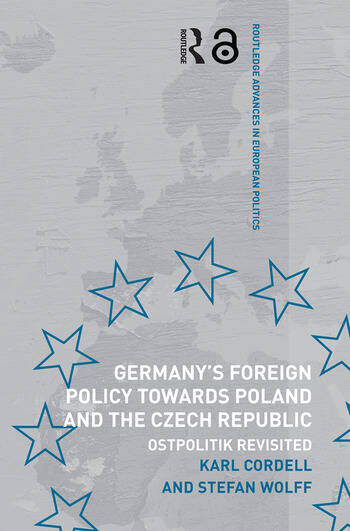 This is a new exploration of how the events of the twentieth century still cast a shadow over relations between Germany, Poland and the Czech Republic.

Using social constructivism theory, it provides a comparative assessment of Germany's post-reunification relations with the Czech Republic and Poland within the framework of the contemporary alliance structure. Identifying the key actors and factors, Cordell and Wolff examine the long-standing continuity in the norms and values that underpin German foreign policy and explore the issues of borders, territory, identities, minorities and population transfers. Paying particular attention to the process of European integration and the role of the new Germany within Europe, the authors identify how new possibilities for co-operation might finally overcome legacies of the past.

This pioneering study will be of particular interest to students of European politics and international studies.

Table of Contents: Acknowledgements, Chapter 1. The German Question and German Foreign Policy: A Conceptual Introduction, Chapter 2. A Usable Past? German-Czech and German-Polish Relations Before The Second World War Chapter 3. An Unsurmountable Legacy? Invasion, Occupation. Expulsion and the Cold War Chapter 4. German-Czech and German-Polish Relations Since The End of The Cold War: An Overview Chapter 5. Foreign Policy and Its Domestic Consumption: The German Political Parties and Ostpolitik. Chapter 6. Domestic Constituencies and Foreign Audiences: The Landsmannschaften and their Impact on German-Polish and German-Czech Relations Chapter 7 The Role of The Minority Populations Chapter 8. Ostpolitik: Continuity and Change Chapter 9. Toward a Common Future?, References, List of Interviews

‘Karl Cordell and Stefan Wolff present a much-needed addition to the literature on the motivations of German foreign policy makers...they seek to present an important piece of the‘German question’ puzzle, and the result is a must-read book for anyone exploring ethnic relations.’ - Journal of Contemporary European Studies

'Cordell and Wolff have published a useful study, which contributes to understanding the special relationship between Germany and its Eastern neighbours.' - Political Studies Review