Getting Better
Television and Moral Progress 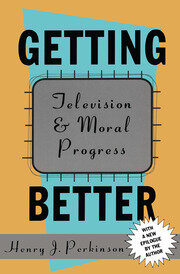 Getting Better: Television and Moral Progress

Ever since the fifties, when television became ascendent in American popular culture, it has become commonplace to bemoan its "bad" effects. Little or nothing, however, has been said about its "good" effects. With this observation, Henry Perkinson introduces his provocative and original analysis of television and culture. Rejecting the determinism inherent in most studies of the effects of television ("We are what we watch"), he insists that it is people that actively change culture, media having no agency to do so. Nevertheless, he argues that television did facilitate the changes we have made in our culture over the past thirty years.Perkinson describes how television helped us become critical of our existing culture, especially of the relationships that were commonly accepted between men and women, blacks and whites, politicians and voters, employers and employees, and between people and the environment. These criticisms have brought about dramatic changes in our social, political, and economic arrangements, as well as changes in our intellectual outlook. Since these changes came about through our efforts to eliminate or reduce discrimination, suffering, and injustice, Perkinson argues that our culture has become more moral in the age of television.In what amounts to a history of recent social change in America, Getting Better examines the role television has played in the rise of feminism, the black protest movement, the presidential elections, the Vietnam War, Watergate, environmentalism, religious fundamentalism, and the New Age movement. This book will be essential reading for students of communications and American culture, and for anyone who wants to make sense of the transformations of American life from the 1950s to the present. Even those who do not agree that things are "getting better" will find that Perkinson's analysis helps to make things more coherent.