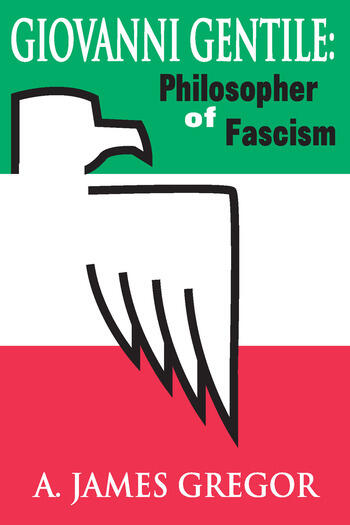 The recent rise in Europe of extreme right-wing political parties along with outbreaks of violent nationalist fervor in the former communist bloc has occasioned much speculation on a possible resurgence of fascism. At the polemical level, fascism has become a generic term applied to virtually any form of real or potential violence, while among Marxist and left-wing scholars discredited interpretations of fascism as a "product of late capitalism" are revived. Empty of cognitive significance, these formulas disregard the historical and philosophical roots of fascism as it arose in Italy and spread throughout Europe. In Giovanni Gentile: Philosopher of Fascism, A. James Gregor returns to those roots by examining the thought of Italian Fascism's major theorist.

In Gregor's reading of Gentile, fascism was-and remains-an anti-democratic reaction to what were seen to be the domination by advanced industrial democracies of less-developed or status-deprived communities and nations languishing on the margins of the "Great Powers." Sketching in the political background of late nineteenth-century Italy, industrially backward and only recently unified, Gregor shows how Gentile supplied fascism its justificatory rationale as a developmental dictatorship. Gentile's Actualism (as his philosophy came to be identified) absorbed many intellectual currents of the early twentieth century including nationalism, syndicalism, and futurism and united them in a dynamic rebellion against new perceived hegemonic impostures of imperialism. The individual was called to an idealistic ethic of obedience, work, self-sacrifice, and national community. As Gregor demonstrates, it was a paradigm of what we can expect in the twenty-first century's response, on the part of marginal nations, to the globalization of the industrialized democracies. Gregor cites post-Maoist China, nationalist Russia, Africa, and the Balkans at the development stage from which fascism could grow.

The first book-length analysis in English of Gentile's thought in over thirty years, this volume is valuable not only as a work of historical scholarship but as a timely warning. While Marxism-Leninism has passed into history, fascism may yet reemerge as an external threat to democratic nations.