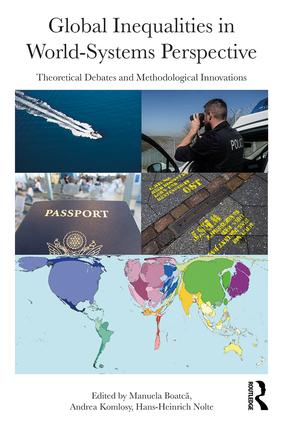 During its 500-year history, the modern world-system has seen several shifts in hegemony. Yet, since the decline of the U.S. in the 1970s, no single core power has attained a hegemonic position in an increasingly polarized world. As income inequalities have become more pronounced in core countries, especially in the U.S. and the U.K., global inequalities emerged as a "new" topic of social scientific scholarship, ignoring the constant move toward polarization that has been characteristic of the entire modern world-system. At the same time, the rise of new states (most notably, the BRICS) and the relative economic growth of particular regions (especially East Asia) have prompted speculations about the next hegemon that largely disregard both the longue durée of hegemonic shifts and the constraints that regional differentiations place on the concentration of capital and geopolitical power in one location. Authors in this book place the issue of rising inequalities at the center of their analyses. They explore the concept and reality of semiperipheries in the 21st century world-system, the role of the state and of transnational migration in current patterns of global stratification, types of catching-up development and new spatial configurations of inequality in Europe’s Eastern periphery as well as the prospects for the Global Left in the new systemic order. The book links novel theoretical debates on the rise of global inequalities to methodologically innovative approaches to the urgent task of addressing them.

Economic inequality is a leading contributor to today’s escalating global tensions and uncertainty and thus the most urgent social issue of our time. This timely and pathbreaking collection offers a wealth of conceptual and methodological innovations to advance new understandings of inequality and the contemporary crises of global capitalism. Leading scholars from several countries offer diverse perspectives and insights that will advance our thinking about today’s global predicament and how social science can help us both understand and act to address it. —Jackie Smith, Professor of Sociology, University of Pittsburgh and editor Journal of World-Systems Research

How does one comprehend contemporary global inequalities? Using the modern world-system perspective this book brings together some innovative essays that explores the way inequalities are being structured in the semi-peripheries through state interventions and migration patterns. A must read for those interested in global stratification patterns. —Sujata Patel, President of the Indian Sociological Society, and Professor of Sociology, University of Hyderabad.

This book contains valuable reviews of the research literature on topics that are central to the world-systems perspective as well as new contributions that extend the framework to issues that have emerged from recent developments in the story of the world. Global inequalities continue to generate both progressive and reactionary social movements and the trajectory of the 21st century could either become another "age of extremes" or it could see the birth of a collectively rational and democratic global commonwealth. The chapters in this book contribute to this second possibility. —Christopher Chase-Dunn, Institute for Research on World-Systems, University of California-Riverside

Inequality is a burning problem of early-21st century world that fueling revolts and influencing the future. There are several contradictory regional trends today from decreasing to increasing inequalities, the catching-up of East Asia and some of the former European peripheral regions (Ireland, Finland, Spain) to the ‘third-worldization’ of Russia, Ukraine, Moldova and other Soviet successor states. Deep factual analysis and theoretical debates are needed for a good understanding. This volume is an important contribution for a better understanding. —Ivan Berend, Professor Emeritus, University of California, Los Angeles (U.C.L.A)

Part I. Semiperipheries in the World-System

1. World-System Zones in the 21st Century: Beyond Core and Periphery, Who Fits Where?

4. Statehood at the End of the Rainbow? Agonistics of Potentiality in the World-System

5. Migration as a Response to Global Inequality

6. Long Waves and Changes in the Structure of the Capitalist World System

7. "Creative Destruction" From a World-Systems Perspective: Billionaires and the Great Recession of 2008

Part III. Developments on and From Europe’s Eastern Periphery

11. Prospects for the World Left

Political Economy of the World-System Annuals