Global Powers of Horror
Security, Politics, and the Body in Pieces 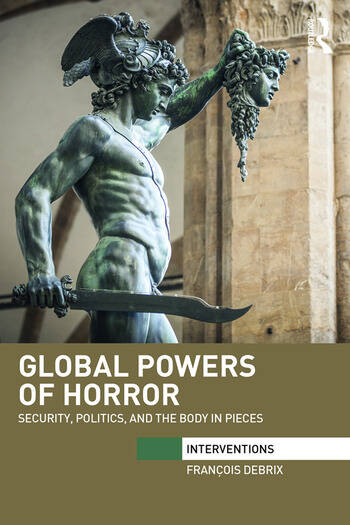 Global Powers of Horror: Security, Politics, and the Body in Pieces

Global Powers of Horror examines contemporary regimes of horror, into horror’s intricacies, and into their deployment on and through human bodies and body parts. To track horror’s work, what horror decomposes and, perhaps, recomposes, Debrix goes beyond the idea of the integrality and integrity of the human body and it brings the focus on parts, pieces, or fragments of bodies and lives. Looking at horror’s production of bodily fragments, both against and beyond humanity, the book is also about horror’s own attempt at re-forming or re-creating matter, from the perspective of post-human, non-human, and inhuman fragmentation.

Through several contemporary instances of dismantling of human bodies and pulverization of body parts, this book makes several interrelated theoretical contributions. It works with contemporary post-(geo)political figures of horror—faces of concentration camp dwellers, body parts of victims of terror attacks, the outcome of suicide bombings, graphic reports of beheadings, re-compositions of melted and mingled remnants of non-human and human matter after 9/11—to challenge regimes of terror and security that seek to forcefully and ideologically reaffirm a biopolitics and thanatopolitics of human life in order to anchor today’s often devastating deployments of the metaphysics of substance.

Critically enabling one to see how security and terror form a (geo)political continuum of violent mobilization, utilization, and often destruction of human and non-human bodies and lives, this book will be of interest to graduates and scholars of bio politics, international relations and security studies.

2. Time and the sovereign body: how security politics confronts the horror of finitude

4. Severing heads: deconstruction hors texte, or what remains of the human

François Debrix is a Professor in the Department of Political Science and the Director of the ASPECT Program at Virginia Tech, USA.

'In this brilliant provocation, Francois Debrix courageously calls us to shift our analyses from the body to body parts, and from terror to horror. Debrix tracks the horror of contemporary global politics in a number of settings, but also uses horror to put forth a most radical, and necessary, critical intervention against regimes of terror and security.' - Brent J. Steele, University of Utah, USA

'Human bodies litter the earth. Some obscured, some forgotten, some celebrated, some torn apart: these bodies have a physical, literal presence, a record of humanity written in flesh and bone. In Global Powers of Horror, Francois Debrix finally gives them the attention they deserve, tracing their political import and influence. The particularities of bodies, from the horrors of severed heads to the limits of embodied life, underpin our most resilient ideas about government, sovereignty, control, and discipline. Debrix’s focus on this corporeal reality literalizes biopolitics and the topographies and theologies of life and death. It proves an essential guide to understanding the violence inherent to contemporary international politics.' - Kennan Ferguson, University of Wisconsin-Milwaukee, USA

"Debrix’s book is a brilliant attempt to theorise horror and its contemporary geopolitical instances by showing how horror dismantles the human condition itself… Debrix calls for a new notion of ‘eschatological horror’, which… can open up a new space, distinct from sovereign violence and the politics of security and terror… [E]schatological horror has an interruptive and a transgressive capacity, which illuminates and actualises new possibilities for radical change in our current age of collective despair. As an assault on the metaphysics of substance, Debrix’s eschatological horror materialises the becoming of a new human/humanity without prophets, connected to a new ‘recombined, or recomposed human matter’ to come." - Ali Riza Taskale, Contemporary Political Theory, October 2017