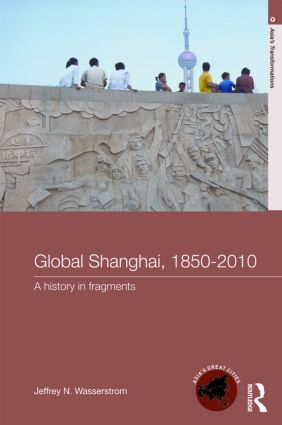 A History in Fragments, 1st Edition

This book explores the play of international forces and international ideas about Shanghai, looking backward as far as its transformation into a subdivided treaty port in the 1840s, and looking forward to its upcoming hosting of China’s first World’s Fair, the 2010 Expo. As such, Global Shanghai is a lively and informative read for students and scholars of Chinese studies and urban studies and anyone interested in the history of Shanghai.

'Like Walter Benjamin in his 'Arcades project', Wasserstrom uses elegant, shrewdly chosen vignettes to illuminate the paradox of urban modernity as simultaneous rupture and nostalgia. If he deflates some of Shanghai's current, boosterish hyperbole, it is only because he is so attentive to the many faces of its past.' - Mike Davis, author of City of Quartz

'Professor Jeffery Wasserstrom has written the most enthralling history of modern Shanghai there is. Global Shanghai does not claim to be a definitive history (it focuses on seven pivotal years set a quarter of a century apart - 1850, 1875, 1900, 1925, 1950, 1975, 2000 - hence the "fragments" of the title), nor does it claim to provide definitive answers to the intriguing questions it raises. Instead, the University of California history professor seeks to frame those questions into a meaningful historical context. The result is a meticulously researched, cornucopic splendiferous wonder. Yes, we did say history book.' - J.F.K. Miller, That's Shanghai

'Adopting a global rather than Eurocentric perspective, Wasserstrom has produced a fascinating, well-researched and empirically grounded study that sheds much needed light on Shanghai's emergence, and re-emergence, as a cosmopolitan city of global importance. Highly Recommended.' - Mark Anthony, History News Network, Jan 2009

'…his descriptions and arguments are well researched and presented. Using newspapers, tourist guides, memoirs and photographs, he makes his points and backs them up. Best of all, he’s not afraid to reach to some pretty unexpected sources for inspiration.' - Far Eastern Economic Review, April 2009

'What makes this scholarly and theory-laden book fascinating is that it gives unusual snapshots of various Shanghai institutions and events in digestible 25-year increments…it's a book well worth reading, if only for the important final question it raises: is Shanghai's future being created or just revisited' - Mina Choi, China International Business, April 2009

'What makes this scholarly and theory-laden book fascinating is that it gives unusual snapshots of various Shanghai institutions and events in digestible 25-year increments.' - China International Business, April 2009

"The history of modern Shanghai has been regularly reassessed by scholars from new viewpoints. Wasserstrom’s Global Shanghai makes an innovative and refreshing contribution to that huge repertoire of revisionist history. His approach combines a broad historical survey with in-depth case studies and personal experience with analytical vigor." - Samuel Y. Liang, Pacific Affairs: Volume 83, No. 3 – September 2010

"Wasserstrom provides an interesting, timely vision of this complex metropolis that raises provocative questions for its leadership about 21st-century urbanization and global change…Summing Up: Recommended. Most levels/libraries." - G. W. McDonogh, CHOICE (January 2010)

Jeffrey N. Wasserstrom is a Professor of History at the University of California, Irvine

Each volume aims to capture the heartbeat of the contemporary city from multiple perspectives emblematic of the authors own deep familiarity with the distinctive faces of the city, its history, society, culture, politics and economics, and its evolving position in national, regional and global frameworks. While most volumes emphasise urban developments since the Second World War, some pay close attention to the legacy of the longue durée in shaping the contemporary. Thematic and comparative volumes address such themes as urbanization, economic and financial linkages, architecture and space, wealth and power, gendered relationships, planning and anarchy, and ethnographics in national and regional perspective.