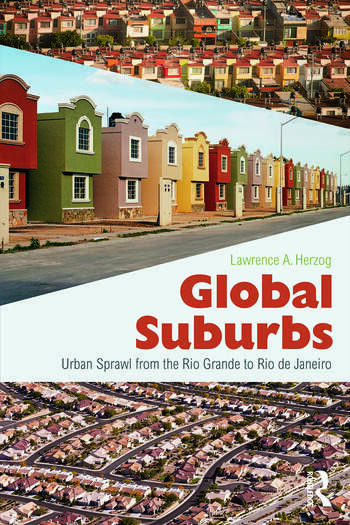 Global Suburbs: Urban Sprawl from the Rio Grande to Rio de Janeiro offers a critical new perspective on the emerging phenomenon of the global suburb in the western hemisphere. American suburban sprawl has created a giant human habitat stretching from Las Vegas to San Diego, and from Mexico to Brazil, presented here in a clear and comprehensive style with in depth descriptions and images. Challenging the ecological problems that stem from these flawed suburban developments, Herzog targets an often overlooked and potentially disastrous global shift in urban development. This book will give depth to courses on suburbs, development, urban studies, and the environment.

1. The Globalization of Urban Sprawl 2. Sprawl Kills: Ecological Crisis on the Urban Periphery 3. Fast Suburbs in the Southwest Borderlands 4. Sprawl South of the Border: From Mexico City to Tijuana 5. A Global Suburb in Rio de Janeiro, Brazil 6. Beyond Urban Sprawl in a Globalizing World

Lawrence A. Herzog is Professor of City Planning in the School of Public Affairs, San Diego State University, California. He has been a Fulbright Scholar twice (Peru, United Kingdom), a consultant to the U.S. Agency for International Development in Peru and Bolivia, and a Visiting Scholar or Visiting Professor in Italy, Spain, U.K., Netherlands, Mexico, Peru and Brazil. He is author/editor of ten books, including Return to the Center (Texas, 2006) and From Aztec to High Tech (Johns Hopkins, 1999). Herzog has published over fifty academic journal articles or book chapters, as well as over fifty popular essays in newspapers and magazines, including the Los Angeles Times, San Francisco Chronicle, New York Newsday, San Jose Mercury News and San Diego Union Tribune.

"Despite the attention to the subject of global cities over the last few decades, few scholars have confronted the ways in which globalization is creating new forms of ‘sub-urbanization.’ Herzog’s new book cleverly confronts this important topic for the rapidly growing metropolitan regions of the Americas. His expansive observations, lively writing and keen photographic eye combine to form a compelling narrative."

"This is a well-researched and powerfully argued account of a key urban trend – the combination of unbridled consumerism and urban sprawl with highly negative impacts on health and civility. The choice of city cases innovates by making comparisons between US and Latin American cities, showing the overall similarities in their market driven, automobile dependent pattern of contemporary development."

"In the aftermath of the recent recession that seemed to hit suburban real estate hardest, it become popular to declare victory over America’s sprawling instincts. Hold on, writes Lawrence Herzog in Global Suburbs, not only have we not yet won the battle at home, but urban sprawl is accelerating internationally. A powerful rebuttal to suburban sprawl, made especially poignant by highlighting its now global dimension."

"Will the twenty-first century city be dominated by suburban sprawl? If it is then, Global Suburbs predicts a grim future, with ecological breakdown, ill-health and diminished sense of place with the social city sacrificed for the 'quick buck' of 'fast urbanism'. Offering a brilliant critique of the suburb, starting in the US and moving through Mexico to Brazil, Larry Herzog makes an impassioned case for 'slow urbanism' and more convivial urban living."

"This is a depressing book. It is a story about the triumph not of the will but of the capitalist project... The take-home lesson is that the raw market model of urban expansion simply will not deliver the kind of urban living experience to which the new middle class aspire."