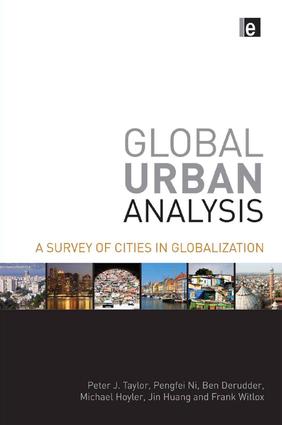 A Survey of Cities in Globalization, 1st Edition

Global Urban Analysis provides a unique insight into the contemporary world economy through a focus on cities. It is based upon a large-scale customised data collection on how leading businesses use cities across the world: as headquarter locations, for finance, for professional and creative services, for media. These data - involving up to 2000 firms and over 500 cities - provide evidence for both how the leading cities, sometimes called global cities, are coming to dominate the world economy, and how hundreds of other cities are faring in this brave new urban world. Thus can the likes of London, New York and Hong Kong be tracked as well as Manchester, Cleveland and Guangzhou, and even Plymouth, Chattanooga and Xi'an. Cities are assessed and ranked in terms of their importance for various functions such as for financial services, legal services and advertising, plus novel findings are reported for the geographical orientations of their connections. This is truly a comprehensive survey of cities in globalization covering global, world-regional, and national scales of analysis: - 4 key chapters outline the global structure of the world economy featuring the leading cities; - 9 regional chapters covering the whole world also feature the level of services provided by 'medium' cities; - 22 chapters on selected countries and sub-regions indicate global-ness and local-ness and feature an even wider range of cities. Written in an easy to understand style, this book is a must read for anybody interested in their own city in the world and how it relates to other cities.

'An indispensable resource for scholars and practitioners around the world.' - Roger Keil, Professor and Director, The City Institute at York University

'This impressive compilation marks a milestone in the international cooperation of researchers on cities in globalization. It will be an indispensable resource for scholars and practitioners around the world.' - Roger Keil, Professor and Director, The City Institute at York University

'The culmination of two decades of work developing a new methodology and building the largest available data set on cities in a global world. This is an extraordinary advance for the now urgent need to measure the diverse and variable connections among cities across borders and time-zones.'- Saskia Sassen, author of The Global City and Professor, Columbia University

'Intensified business connections among cities form one of the key expressions of contemporary globalization; their nature and geography are constantly changing. Global Urban Analysis provides the most comprehensive investigation of such connections that has ever been undertaken. Based on a sophisticated theorization of the global urban system, well-crafted methodological tools and an awesome trove of empirical data, this book is a truly path-breaking analysis of globalized urbanization. This is an essential resource for all who are concerned to understand and to influence the changing shape of our hyperurbanized world.'- Neil Brenner, Professor of Sociology and Metropolitan Studies, New York University

'For the first time we can evaluate cities in our own country while seeing how they relate to the rest of the global economy. This is a breathtaking achievement.' - Fan Gang, Economist and Vice Chairman of the China Reform Foundation (NERI-China), Beijing, China

'I can recommend Global Urban Analysis as a benchmark volume for planners and others who study the changing world and its major cities.' - Edward J. Malecki, Journal of Planning and Education and Research