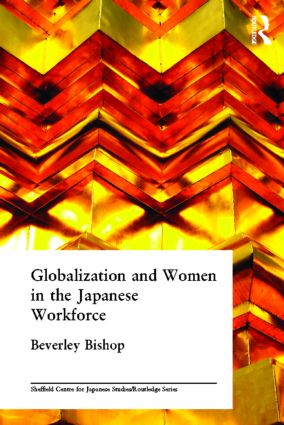 Globalisation and Women in the Japanese Workforce

Globalisation and Women in the Japanese Workforce contributes to the debate about the impact of globalisation upon women. It examines the effect of restructuring upon women's employment in Japan and describes the actions women are taking individually and collectively to campaign for change in their working environment and the laws and practices regulating it.

'Bishop has produced a valuable study on the impact of globalization for Japanese working women, which not only contributes broadly to globalization and gender debates but also provides detailed information on the continuing restructuring of women's employment in Japan … an important and valuable research contribution.' - Asian Affairs

List of Abbreviations Glossary of Japanese Terms List of Figures Introduction 1. Aims, Methodology and Structure of Book Part 1 Analytical Framework 2. A Critical Analysis of Globalization 3. Gender and Globalization: A Critical Review Part 2 Background to the Analysis 4. The Japanese Model of Capitalism and the Globalization

of Japanese Production 5. Women Workers in the Post-War Model of Capitalism in Japan: Continuity and Change Part 3 The Impact of Globalization and Restructuring on Women Working in Japan 6. Re-Regulation, Restructuring and Women in the Regular Workforce 7. Deregulation, Restructuring and Women Working in Non-Regular Positions 8. Globalization and Women's Activism in Japan Conclusion 9. Conclusions and Discussion Bibliography Appendix A: Details of 1996/7 Pilot Survey Appendix B: Working Women Respondents Appendix C: Elite Interviews

Beverley Bishop is a Senior Research Officer at the Department of Education and Skills. In 2003 she was awarded a PhD at Sheffield University for research on the impact of globalisation.

This well-established series with one of the pre-eminent institutions for Japanese Studies in Europe publishes cutting-edge research and authoritative introductory texts on modern Japan and the Japanese. Editorial policy encourages leading and promising younger scholars to contribute especially social scientific analysis on a wide range of Japan-related subjects.