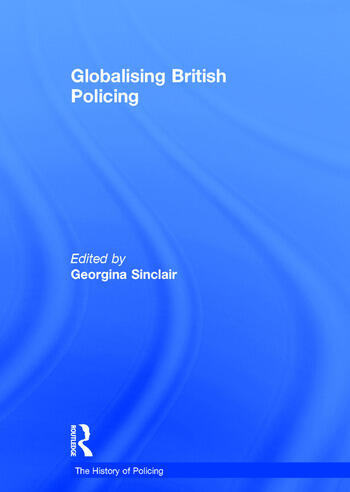 Globalising British Policing demonstrates how the policing system in place in Britain today has emerged from an historical overlap of two broad policing models: a civil (English) and a semi-military (colonial) tradition. Until relatively recently colonial policing received considerably less scholarly attention than the policing of mainland Britain. This volume comprises four sections: section I considers works on British colonial policing up until the Second World War; section II moves to post-war colonial policing through the era of decolonisation; section III looks more closely at the policing of Northern Ireland, and, section IV shows how the meshing of these policing systems are currently contributing to the globalisation of British policing today.

Contents: Introduction; Part I Colonial Policing (to 1945): The armed police and colonial rule in South India, 1914-1947, David Arnold; An Act to Colonise the Internal Lands of the Island: empire and the origins of the professional police, Michael Brogden; A glance at police duties in the Empire, Sir John Cumming; The Ceylon Police and its development, H.L. Dowbiggin; From Dowbiggin to Tegart: revolutionary change in the colonial police in Palestine during the 1930s, Gad Krozier; The 'Irish model' and nineteenth-century Canadian policing, Greg Marquis. Part II Colonial Policing (1945-1980): Policing and communal conflict: the Cyprus emergency, 1954-60, David M. Anderson; Colonial policing and the demise of British rule in Hong Kong, Mark S. Gaylord and Harold Traver; The maintenance of law and order in British colonial Africa, David Killingray; Colonial policing in Aden, 1937-1967, John Willis. Part III Policing Northern Ireland (From the RUC to the PSNI): A blueprint for democratic policing anywhere in the world? Police reform, political transition, and conflict resolution in Northern Ireland, Graham Ellison; Policing Northern Ireland: current issues, Andrew Hamilton; Visions of normality: peace and the reconstruction of policing in Northern Ireland, AogÃ¡n Mulcahy; Community policing and the reform of the Royal Ulster Constabulary, Jim Smyth. Part IV Exporting British Colonial Policing: From Empire to Iraq and the 'war on terror': the transplantation and commodification of the (Northern) Irish policing experience, Graham Ellison and Conor O'Reilly; From Empire to Europe: evolving British policy in respect of cross-border crime, Clive Harfield; Building a global police studies community, Otwin Marenin; 'Home and away': the cross-fertilisation between 'colonial' and 'British' policing, 1921-85, Georgina Sinclair and Chris A. Williams; Name index.

Georgina Sinclair is a Research Associate in the Department of History at The Open University, UK