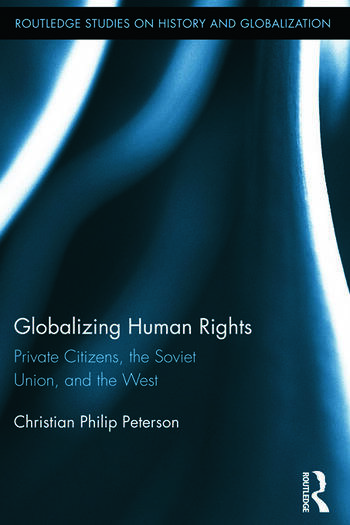 Globalizing Human Rights explores the complexities of the role human rights played in U.S.-Soviet relations during the 1970s and 1980s. It will show how private citizens exploited the larger effects of contemporary globalization and the language of the Final Act to enlist the U.S. government in a global campaign against Soviet/Eastern European human rights violations. A careful examination of this development shows the limitations of existing literature on the Reagan and Carter administrations’ efforts to promote internal reform in USSR. It also reveals how the Carter administration and private citizens, not Western European governments, played the most important role in making the issue of human rights a fundamental aspect of Cold War competition. Even more important, it illustrates how each administration made the support of non-governmental human rights activities an integral element of its overall approach to weakening the international appeal of the USSR.

In addition to looking at the behavior of the U.S. government, this work also highlights the limitations of arguments that focus on the inherent weakness of Soviet dissent during the early to mid 1980s. In the case of the USSR, it devotes considerable attention to why Soviet leaders failed to revive the international reputation of their multinational empire in face of consistent human rights critiques. It also documents the crucial role that private citizens played in shaping Mikhail Gorbachev’s efforts to reform Soviet-style socialism.

Christian Peterson holds a Ph.D. in history from Ohio University and has authored Ronald Reagan and Antinuclear Movements in the United States and Western Europe, 1981-1987 (2003). He is currently a Visiting Assistant Professor at Ferris State University and teaches a wide variety of courses in U.S and World history.