Glocal Languages and Critical Intercultural Awareness
The South Answers Back 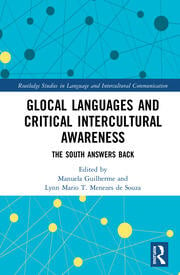 Glocal Languages and Critical Intercultural Awareness: The South Answers Back

This volume provides a new perspective on prevailing discourses on translanguaging and multilingualism by looking at ‘glocal’ languages, local languages which have been successfully "globalized". Focusing on European languages recreated in Latin America, the book features examples from languages underexplored in the literature, including Brazilian Portuguese, Amerinidian poetics, and English, Spanish, Portuguese outside Europe, as a basis for advocating for an approach to language education rooted in critical pedagogy and post-colonial perspectives and countering hegemonic theories of globalization. While rooted in a discussion of the South, the book offers a fresh voice in current debates on language education that will be of broader interest to students and scholars across disciplines, including language education, multilingualism, cultural studies, and linguistic anthropology.

Chapter 1: Glocal Languages, Coloniality and Globalization from Below

Chapter 2: Glocal Languages Beyond Postcolonialism: The North and the South in the north and in the south

Chapter 3: Glocalism Now and Then: The De-colonial Turn of Guarani, Portuguese and Spanish

Chapter 5: The Imaginary in Portuguese Language Perceptions in Academia: (Mis)directions Between the Local and the Global

Chapter 6: The Linguistic Atlas of Brazil Project: Contributions Towards Knowledge, Teaching and Disclosure of Brazilian Portuguese

Chapter 7: Comparisons Between Spanish and Portuguese: Proposals for University Teaching

Chapter 8: Multiculturalism and Glocal Languages: The Impact of Cultural Mobility in Spanish Teaching and Learning in Southern Brazil

Chapter 9: English (Mis)education as an Alternative to Challenge English Hegemony: A Geopolitical Debate

Conclusion: Towards Globalization from Below

Manuela Guilherme is a Marie Curie Research Fellow at the Center for Social Studies at the University of Coimbra, Portugal.

is Professor of Language Studies at the University of São Paulo, Brazil.