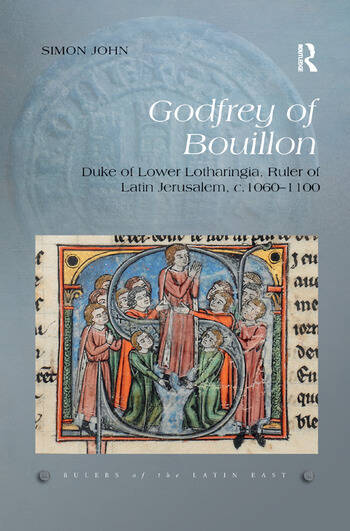 This book offers a new appraisal of the ancestry and career of Godfrey of Bouillon (c.1060-1100), a leading participant in the First Crusade (1096-99), and the first ruler of Latin Jerusalem (1099-1100), the polity established by the crusaders after they captured the Holy City. While previous studies of Godfrey’s life have tended to focus on his career from the point at which he joined the crusade, this book adopts a more holistic approach, situating his involvement in the expedition in the light of the careers of his ancestors and his own activities in Lotharingia, the westernmost part of the kingdom of Germany. The findings of this enquiry shed new light on the repercussions of a range of critical developments in Latin Christendom in the eleventh and early twelfth centuries, including the impact of the ‘Investiture Conflict’ in Lotharingia, the response to the call for the First Crusade in Germany, Godfrey’s influence upon the course of the crusade, his role in its leadership, and his activities during the initial phases of Latin settlement in the Holy Land in its aftermath.

Lotharingia and its place in the Western Empire

The career of Godfrey the Bearded

The career of Godfrey the Hunchback

The military campaigns of Henry IV of Germany

Godfrey’s response to the call for the First Crusade

Godfrey’s preparations for the First Crusade

Godfrey’s death and the succession of Baldwin I

Epilogue - Godfrey’s reputation in the twelfth and thirteenth centuries

Simon John is Lecturer in Medieval History at Swansea University. He previously taught at the University of Oxford, and held a Junior Research Fellowship at the Institute of Historical Research. Much of his work to date has focussed upon the crusades and their socio-cultural impact in Latin Christendom. He has published articles in the English Historical Review, the Journal of Medieval History and the Journal of Ecclesiastical History, and is the co-editor (with Nicholas Morton) of Crusading and Warfare in the Middle Ages: Realities and Representations. Essays in Honour of John France (2014).