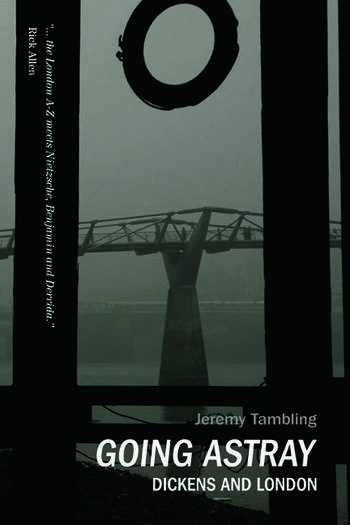 ‘Among the numerous books on Dickens’s London, Going Astray is unique in combining detailed topography and biography with close textual analysis and theoretically informed critiques of most of the novelist’s major works. In Jeremy Tambling’s intriguing and illuminating synthesis, the London A-Z meets Nietzsche, Benjamin and Derrida.’ Rick Allen, author of The Moving Pageant: A Literary Sourcebook on London Street-Life, 1700-1914

Dickens wrote so insistently about London – its streets, its people, its unknown areas – that certain parts of the city are forever haunted by him. Going Astray: Dickens and London looks at the novelist’s delight in losing the self in the labyrinthine city and maps that interest, onto the compulsion to ‘go astray’ in writing.

Drawing on all Dickens’ published writings (including the journalism but concentrating on the novels), Jeremy Tambling considers the author’s kaleidoscopic characterisations of London: as prison and as legal centre; as the heart of empire and of traumatic memory; as the place of the uncanny; as an old curiosity shop. His study examines the relations between narrative and the city, and explores how the metropolis encapsulates the problems of modernity for Dickens – as well as suggesting the limits of representation.

Combining contemporary literary and cultural theory with historical maps, photographs and contextual detail, Jeremy Tambling’s book is an indispensable guide to Dickens, nineteenth- century literature, and the city itself.