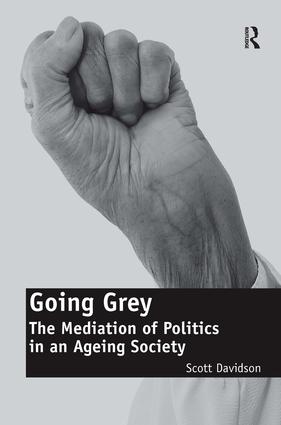 The Mediation of Politics in an Ageing Society, 1st Edition

Developed countries throughout the world are experiencing population ageing and the new challenges that arise from this change in the national demographic. The phenomenon of an ageing population has necessitated policy reform regarding the role of the state in providing income in retirement and the whole wider social meaning of later life. The politics of ageing have become a key issue for young and old voters alike as well as those who seek to represent them. Politicians carefully consider strategies for developing relationships with older voters in the context of both policy decisions and campaigns as issues that directly affect an ageing population often prove crucial in local and national election campaigns. 'Going Grey' provides insight into how ageing and the increased proportion of older voters is being framed by the media. It investigates emerging discourses on the topic founded on economic pessimism and predictions of inter-generational conflict. By bringing together political communication and media discourses and placing them within the wider context of an ageist society this unique contribution demands us to re-think how the media portray and frame later life and examines the strategic electoral dilemmas facing political parties today. It provides an original and timely resource for scholars, students and general readers interested in understanding more about the mediation of, and the strategic campaign responses to, rapidly ageing populations.

’In this original and important book, Scott Davidson analyses an increasingly significant political and cultural phenomenon. With societies now and in the immediate future containing an increasing proportion of older citizens, political parties will need to give greater attention to the so-called grey vote�. Not only will their campaigning strategies be challenged, but also ingrained cultural prejudices, shared by both politicians and journalists, will have to change. The social and political implications of ageing are also a neglected field of academic study, a situation which this pioneering book seeks to redress.’ Andrew Tolson, De Montfort University, UK

Dr Scott Davidson is at the University of Leicester, UK. Alongside his academic career Scott has a professional career history of over ten years working in public affairs, campaigns and the media, including a period as campaigns manager for Age Concern. He brings to his research his experience of creating and managing a wide range of successful initiatives and campaigns, drawing upon direct experience of working in political communications as well as in the local government, health and voluntary sectors.