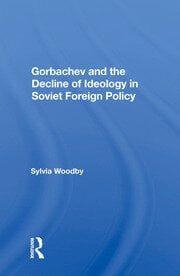 This book examines the ways in which Mikhail Gorbachev has modified the ideology of Soviet foreign policy and offers a tentative assessment of the prospects and potential impact of these changes. It presents extracts from Gorbachev's own speeches and relevant documents. .

Part One: Evolution of Gorbachev's new Vision 1. Introduction 2. Ideology and Perestroika 3. Ideology and Foreign Policy 4. Banishing the Class Struggle 5. Foreign Policy Self-Criticism 6. Ideological Revision and Gorbachev's Foreign Policy Goals 7. Prospects for Gorbachev's Secular Outlook Part Two: Selections from Relevant Speeches and Documents 8. Political Report of the CPSU Central Committee to the 27th Congress of the Communist Party of the Soviet Union, 9. 70th Revolutionary Anniversary Speech 10. Speech to a Meeting of Representatives of Parties and Movements Participating in the Revolutionary Anniversary Celebrations 11. Speech to the Central Committee Plenum 12. "I Cannot Waive Principles," 13. "Principles of Restructuring: Revolutionary Nature of Thinking and Acting," 14. Thesis No. 10, Issued by the Central Committee for the 19th All-Union Party Conference 15. Report of the Central Committee to the 19th All-Union Party Conference 16. Speech to the United Nations General Assembly 17. Speech to Kiev Workers 18. Report to the Congress of People's Deputies