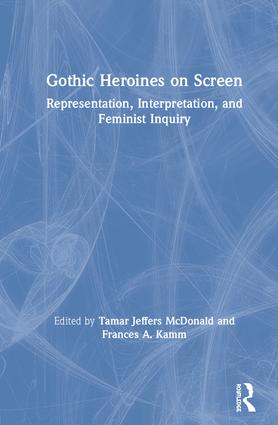 Gothic Heroines on Screen explores the translation of the literary Gothic heroine on screen, the potential consequences of these adaptations, and contemporary interpretations of the form.

Each chapter illuminates the significance of this moving image mediation, relating its screen topics to their various historical, social, and geographical moments of production, while maintaining a focus on the key figure of the investigating woman. Many chapters – perhaps inescapably – delve into the point of adaptation: the Bluebeard story and du Maurier’s Rebecca as two key examples. Moving beyond the Old Dark House that frequently forms both the Gothic heroine’s backdrop and her area of investigation, some chapters examine alternative locations and their impact on the Gothic heroine, some leave behind the marital thriller to explore what happens when the Gothic meets other genres, such as comedy, while others travel away from the usual Anglo-American contexts to European ones.

Throughout the collection, the Gothic heroine’s representation is explored within the medium, which brings together image, movement, and sound, and this technological fact takes on varied significance. What does remain constant, however, is the emphasis on the longevity, significance, and distinctiveness of the Gothic heroine in screen culture.

Tamar Jeffers McDonald is Reader in Film at the University of Kent and co-organiser of the Gothic Feminism research group. She has published on issues of film genre, film costume, stardom, performance, and movie magazines.

is an early career researcher and Associate Lecturer at the University of Kent, and co-organiser of the Gothic Feminism research project. She was awarded her PhD in Film Studies with the thesis entitled ‘The Technological Uncanny and the Representation of the Body in Early and Digital Cinema’.