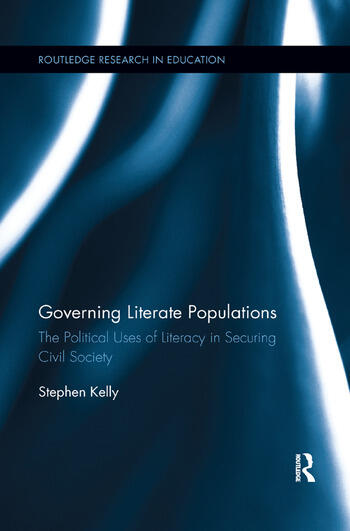 Securing the hearts and minds of ‘dangerous’ populations is a major concern for governments across the world. Governing Literate Populations shows how ‘governmentalities’ have deployed education and literacy in different ways in order to protect their national, social, economic and geopolitical security interests. Presenting a Foucauldian Genealogy of literacy and education, Kelly argues that government apparatuses strategically contain the rise of complex social forces to protect homogenous cultural values.

Kelly’s work traces the development of the relationship between liberal governmentalities and the securitization of ‘martial’ literate citizenries from its beginnings in the Enlightenment, starting with Hobbes’ Leviathan in 1651, through to the emergence of human security in 1994. He then examines the situation in Australia from 1995-2007, investigating political statements by the Howard Government and the insurgent Rudd opposition against the backdrop of the ‘age of terror’. The conclusion takes another historical cut by considering how the political uses of literacy can be located in the texts of Plato, before examining how the conceptualization of literate subject as citizen of the state has come to be realized in the United Kingdom and the United States of America.

Governing Literate Populations draws on data obtained from historical texts, including political and economic treatises, publications by NGOS, media sites, government policies and archived political speeches. As such, it will appeal to academics, researchers and postgraduate students examining education policy and the political uses of education, as well as literacy education and the history of education. Those with an interest in politics, sociology and history will also find this work a highly informative resource.

2. Using Genealogy to Think about the Politics of Education

4. From Sovereign Power to Governing the Self

5. Securing Literate Civil Society in the "Age of Terror"

8. Education for the National Interest: Reimagining Scales of Government

Stephen Kelly was awarded his Ph.D. from the Queensland University of Technology in July of 2015. He began his career as a Drama and English teacher and over the last few years has worked as a literacy consultant. He has research interests in both the philosophy and sociology of education. In bridging these two areas of interest, Stephen’s research agenda focuses on the possibilities of democratic education. Using Foucault’s concept of parrésia he is interested in how learners are encouraged to become fearless speakers to claims to truth. Stephen has recently accepted a position at the University of New England, Armidale in the School of Education.

'A refreshingly discerning interrogation of literacy as a practice of government. Highlighting longstanding and ongoing connections between literacy education and securitisation this pioneering study of education policy is scholarly, methodologically meticulous and theoretically audacious'. – Julie Matthews, Associate Head of Research, The University of Adeleide, Australia

‘A half century after Richard Hoggart's original "The Uses of Literacy" - this important new work by Stephen Kelly explains how public policy and media debate over literacy have been reenlisted by the neoliberal state for economic and political purposes.’

‘For many years now policy studies have been directing our attention to the ways that policy in education is framed specifically to serve national competitiveness in a globalising economy. Stephen Kelly's brilliant new book shifts our attention to the way that education policy is also framed in terms of the demands of the security state. National security concerns now reach into schools to constitute 'good' literacy practices. Stephen's book provides a thoughtful engagement with Foucault's extensive account of neoliberal govern-mentality in his recently translated lectures, Security, Territory, Population and the Politics of Bio-power.’

‘Literacy is one of those social forms that everyone values. Who isn’t in favour of community, transparency, or literacy? It is precisely the universal and unquestionable appeal of literacy that makes it such a powerful and seductive form. Governing Literate Populations critically interrogates this power, making this book tremendously important not just for scholars of education but anyone interested in the genealogy of modern government.’

‘This highly readable study makes a wide ranging and lucidly organised use of Foucault's methods and ideas to firmly situate and historicise the current policy environment around literacy and education within the global context of increasing concerns around security. In its timely and novel focus on the nexus between security, literacy and education policy, with detailed illustrations from the Australian political context, this book raises important and urgent concerns about the tensions between security and freedom in the contemporary state.’

‘This important book offers a powerful reframing of the social and political aspirations usually attached to literacy and its civic functions. In showing how concerns with security are transforming everyday education, it brings a critical and historicising eye onto the promises of literacy and the work it does in making citizens in an era of insecurity. It speaks to educators and beyond and brings alive the rich value of careful genealogical work.’ - Julie McLeod, Professor in Melbourne Graduate School of Education, University of Melbourne, Australia