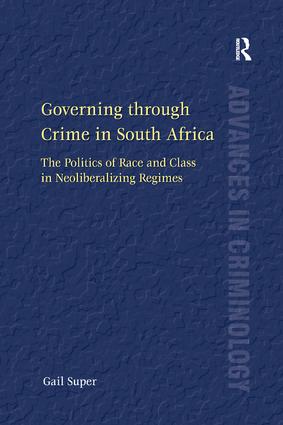 Governing through Crime in South Africa

The Politics of Race and Class in Neoliberalizing Regimes, 1st Edition

This book deals with the historic transition to democracy in South Africa and its impact upon crime and punishment. It examines how the problem of crime has emerged as a major issue to be governed in post-apartheid South Africa. Having undergone a dramatic transition from authoritarianism to democracy, from a white minority to black majority government, South Africa provides rich material on the role that political authority, and challenges to it, play in the construction of crime and criminality. As such, the study is about the socio-cultural and political significance of crime and punishment in the context of a change of regime. The work uses the South African case study to examine a question of wider interest, namely the politics of punishment and race in neoliberalizing regimes. It provides interesting and illuminating empirical material to the broader debate on crime control in post-welfare/neoliberalizing/post transition polities.

’Gail Super's analysis of how political upheaval and economic re-structuring impacted crime and social order in post-apartheid South Africa is as surprising as it is sobering. Anyone interested in the relationship between punishment and political economy, or between neoliberalism and insecurity, should read this book.’ David Garland, New York University, USA ’This book is a must read for those who are interested in how crime has governed South Africa and how crime has been governed, both before and after democracy. It is the most nuanced book on crime in post-apartheid South Africa to date. A must read and likely to become a required text for criminology students.’ Monique Marks, University of KwaZulu-Natal, South Africa ’This book offers both an historical and socio-economic analysis of both the widespread and egregiously violent nature of South African crime. Entering where many fear to tread, Super opens up new vistas of understanding which makes this book essential reading for anyone who wishes to gain rational guidance to the daily tragedies that occur in South Africa as a consequence of unspeakable assaults on ordinary people.’ Dennis Davis, University of Cape Town and High Court, South Africa

Gail Super is a Post-Doctoral Research Fellow at the Centre for Criminology, University of Cape Town, Cape Town, South Africa. She has a PhD in Law and Society from New York University, where she worked with David Garland, an MSc in Criminology from the London School of Economics, where she worked with the late Stan Cohen, and a law degree from the University of Cape Town. Before embarking on postgraduate studies Gail practiced as a human rights lawyer at the Legal Assistance Centre in Namibia and as an international human rights consultant, with a focus on children in trouble with the law. It was under her stewardship that the Legal Assistance Centre was awarded the UNICEF Maurice Pate award for innovation in the field of children’s rights. She has had articles published in leading international journals such as the British Journal of Criminology and Theoretical Criminology.